Rules allowing farm buildings to be converted into homes without needing planning permission were introduced last spring. Among a host of change of use permitted development (PD) rights that the government has brought in over the past two years, these are intended to increase housing supply.

But while office-to-residential conversions may be causing a storm in urban areas, in the countryside it is barn-to-home PD rights that are stoking growing discontent, particularly for applicants.

Under the new rules, in class MB of the General Permitted Development Order, applicants must notify councils to decide whether prior approval is needed for proposed barn conversions' transport, highways and noise impacts.

Officers must also consider whether there is a risk of contamination or flooding and if the site makes conversion "otherwise impractical or undesirable". Announcing the rules, then planning minister Nick Boles said they "will make better use of redundant or underused agricultural buildings, increasing rural housing without building on the countryside".

But latest government figures show that councils are refusing just over half of conversion applications made under class MB (see panel, facing page). The high refusal rate has caused anger from property groups and concern among ministers. Lobby group the Country Land and Business Association (CLA) has called the situation a "scandal" and urged planning minister Brandon Lewis to intervene.

Department for Communities and Local Government (DCLG) chief planner Steve Quartermain, meanwhile, has warned councils that they must follow the rules correctly when determining bids. "To get a 50 per cent-plus refusal rate suggests that legislation is not achieving what was hoped," says Tony Kernon, of Kernon Countryside Consultants.

A DCLG spokesman said: "We are keeping the operation of these rights under review and will issue guidance if there is evidence of deliberate and consistent misapplication by local planning authorities." He added that applicants could appeal if they believe that a council "has been unreasonable in withholding prior approval".

However, the Planning Inspectorate (PINS) appears to be backing the refusals. Analysis by Planning's sister service Development Control Services of the ten decisions made so far on appeals against refusal of applications under class MB shows nine to have been dismissed by inspectors.

In six cases, the inspector cited location as a key reason, ruling that sites were too remote and thus unsustainable. In one ruling, for a project in Cumbria (DCS Number 400-005-443), the inspector justified his refusal by referring to National Planning Policy Framework provisions that seek to preserve the beauty of the countryside and limit isolated new rural dwellings.

These decisions suggest that high refusal rates simply show that the new rules have prompted a number of applications that do not fulfil the PD criteria. But private sector interests beg to differ, saying the problem lies with councils not following the regulations correctly. Fenella Collins, CLA head of planning, says local authorities are worried about the loss of control that extended PD rights entail.

Kernon adds: "It's clearly unpopular with authorities and they appear to have striven to find ways to resist the applications. I think that there's an in-built consensus that isolated rural homes are inherently unsustainable. But that hasn't been the government's position for a long time."

Unsurprisingly, council planning chiefs take a different perspective. Phil Skill, head of planning at Stroud District Council, says the fault generally lies with applicants. The high refusal rate is due to "confused" applicants not reading the criteria or receiving poor advice, he says. Government rhetoric on enabling conversions is not matched by the strictly worded legislation, Skill says, adding that it "is not what was described on the tin".

Matt Thomson, head of planning at the Campaign to Protect Rural England, says applicants struggle with what is and is not allowed. "They are seeing what they can get away with," he says. The criteria for agricultural-to-residential conversions have more conditions than those for PD rights such as commercial-to-residential, he says, giving councils fewer reasons to grant prior approval.

Philip Ridley, head of planning at both Suffolk Coastal and Waveney District Councils and the Planning Officers Society's natural resources specialist, says the criteria "appear to be very tightly worded". He says: "If authorities are taking a literal interpretation, I can understand why a fair number of applications have been refused."

The issue most likely to prompt refusal is location. Kernon says the condition has been interpreted far too broadly by councils. "The government wasn't intending for authorities to question the sustainability of location, as agricultural buildings are almost always in isolated places," he says.

The most common reason for refusal in Stroud, says Skill, is "greedy" applicants seeking PD rights for more than the existing building's footprint. The rights only apply to "land within the building's curtilage", the regulations say, "no larger than the land area occupied by the agricultural building". Any development exceeding the building's dimensions is also prohibited.

The second most common issue, says Skill, is whether the building was part of a farming business sufficiently recently. The rules stipulate that it must have been in agricultural use up to 20 March 2013, a year before the PD rights came into force. But Skill has seen many applications to convert barns with no land attached, so the building cannot be deemed to have formed part of an agricultural business at the relevant time.

Another "fundamental issue" relates to the type of buildings applicants want to convert and whether planning officers consider these suitable for residential use, says Barry Davies, chairman of the rural planning division at the British Institute of Agricultural Consultants (BIAC). When introducing the rules, the government intended conversion of traditional "brick and tar range" buildings, he believes.

However, the legislation does not specify this, and applications are being lodged to convert concrete buildings and large, round-roofed 'Dutch barns'. Development management officers instinctively see many of these as unsuitable, says Davies. Some consultants are submitting drawings showing how the building could be converted, he adds, though there is no requirement to do so.

Planning chiefs and consultants agree that the regulations' wording is ambiguous in places, confusing applicants and decision-makers. Kernon says: "It's a muddle at the moment." This has led to a growing call for guidance, particularly from the private sector. Davies says: "It would help, but I don't know whether we will get any. I think that the DCLG will wait until the system's been in place for a year." Collins agrees that guidance would be "very useful", and says the DCLG is already inundated with complaints from applicants. But she also doubts that anything will be issued soon.

In these circumstances, Davies says BIAC is keen to work with others in the sector such as the CLA and to engage planning officers to deal with issues. He adds: "If by April there is still a 50 per cent refusal rate, there will be enormous pressure on the DCLG. We shouldn't be getting so high a rate."

The latest government data on prior approval applications made under the new permitted development (PD) rights show that agricultural-to-residential is by far the most likely of the types of conversion that are enabled under PD to be refused prior approval by local authorities.

Councils in England refused 52 per cent of agricultural-to-residential prior approval applications in the three months after the new rules were introduced, from April to June last year. From July to September, even though the number of applications had quadrupled from 162 to 671, the refusal rate remained almost identical at 51 per cent.

In comparison, refusal rates for the controversial office-to-residential prior approval applications have been just 19 and 16 per cent respectively in the two quarters following their introduction, while just 15 per cent of householder extension applications were refused in both quarters.

The average refusal rate for all new PD rights introduced since spring 2013 has been 15 and 18 per cent respectively in the two quarters after they came into effect. The only other category with a refusal rate of more than one-third was for agricultural buildings to flexible uses, which shot up to 36 per cent in the most recent quarter, from 13 per cent. 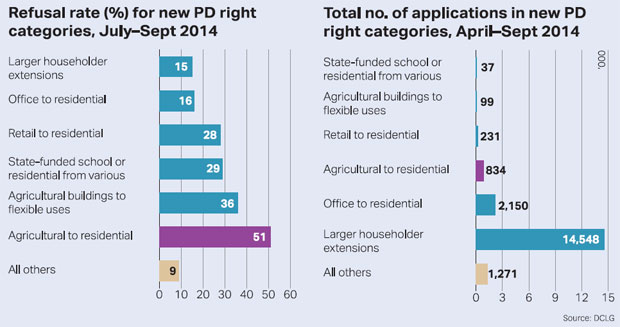