An analysis of secretary of state decision notes found that Pickles decided 28 recovered appeals involving onshore wind in 2014, a significant increase on 2013 when he only made four such decisions.

Where an appeal is recovered, rather than have an inspector make a decision, one appointed by Pickles recommends how the appeal should be determined. The secretary of state himself then takes the decision.

Of the 28 wind appeals decided by Pickles in 2014, 25 were dismissed, according to Planning’s analysis, with the refused applications containing plans for 100 turbines.

The analysis showed that 11 of the 25 dismissed appeals (44 per cent) were refused against inspectors’ recommendations. If Pickles had accepted the advice, he would have approved 61 turbines in 2014 rather than 11, the findings suggest.

The secretary of state refused permission for five wind turbines in South Northamptonshire and three in North Lincolnshire, rejecting his inspectors’ advice. He also blocked four turbines in Aylesbury Vale, Buckinghamshire, this time in line with an inspector’s recommendation.

Yana Bosseva, planning adviser at lobby group Renewable UK, said the secretary of state’s intervention in onshore wind energy appeals is sending "shockwaves" through the industry. "Before there were rules to the game and everyone knew what the rules were," she said. "These days, there are no rules."

Bosseva said the secretary of state had temporarily altered recovery criteria in October 2013 to let him scrutinise appeals involving wind proposals, to test whether new guidance met the government’s aims.

But Bosseva asked why Pickles had extended the change for a year last April. "If you write policy, it should be clear enough for decision-makers to know what to do with it," she said.

According to Renewable UK figures, Pickles is recovering around of 80 per cent of wind projects at appeal, said Bosseva. "He’s not leaving much to planning professionals," she added.

David Bell, director at consultancy JLL, which advises wind energy developers, said the recovered appeals – and the high level of refusals against inspectors’ advice - represented an "extreme politicisation of the planning process in this sector".

Bell suggested that several wind developers are delaying investment decisions and appeals, "holding out for a government change in May".

Karl Cradick, head of energy and infrastructure planning at consultancy Savills, said the situation is "murky" and in his opinion "it is difficult to understand why quite so many projects are being refused".

According to Cradick, Pickles is exploiting the Court of Appeal’s decision in last year’s Barnwell Manor case to refuse a number of recovered wind appeals.

The court’s ruling stressed that, by virtue of section 66(1) of the Planning (Listed Buildings and Conservation Areas) Act 1990, preserving the setting of listed buildings should be given "considerable importance and weight" in the planning balance.

Cradick said he is concerned at how widely, in terms of area and distance, the setting of heritage assets is being defined for this purpose. He said: "If the wind industry’s experience is replicated in other sectors, it might become difficult to promote any major development without meeting substantial heritage objections."

John Silvester, publicity officer for the Planning Officers Society, said: "We would expect inspectors’ recommendations to be fairly considered and tested on planning grounds and not on other grounds."

Communities minister Kris Hopkins said every appeal is considered with "due process on its individual merits, based on the particular circumstances". He added: "The government has intentionally and transparently changed official planning guidance and appeal recovery rules to ensure that these issues are better taken into account." 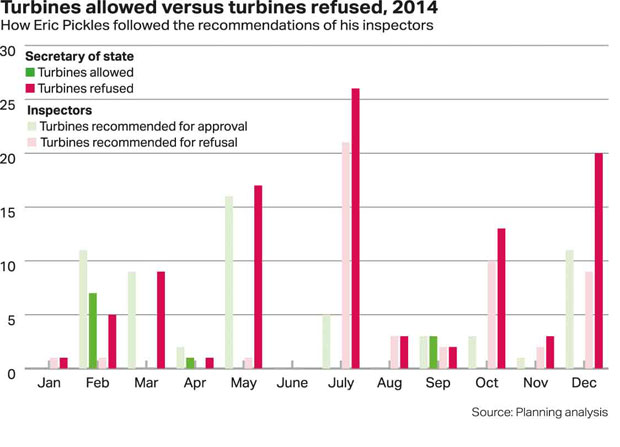