The report by public spending watchdog the National Audit Office (NAO), published earlier this month, revealed that planning and development services at English councils have been affected by disproportionate cuts in the first years of the coalition government.

The report said departments at single-tier authorities and county councils have faced real-terms budget cuts of 46 per cent between 2010/11 and 2014/15, against 28 per cent across all local government.

According to the report, planning and development services at district councils have fared better, with only 24 per cent cuts in the same period.

According to the report, planning and development services accounted for 21 per cent of total budgeted savings between 2010 and 2012, but this proportion had dropped to six per cent between 2013 and 2015.

Local authority proposals published so far suggest that further big cuts in resources for planning departments are unlikely to figure in 2015/16 budget plans, despite a general push for fresh savings across the board.

Council planning chiefs told Planning that a combination of rising fee income and earlier radical cutbacks are likely to protect staffing levels in town hall planning teams, but warned that those teams are facing rising workloads.

Anna Rose, junior vice-president at the Planning Officers Society, said while the cuts were made a few years ago, the "bite" is only now being felt because planning services are dealing with workloads that have returned to late 2000s levels but have far fewer staff to tackle them.

Birmingham and Liverpool City Councils each told Planing that they had reduced planning staff by around 40 per cent since 2010.

Waheed Nazir, Birmingham’s director of planning and regeneration, said the process had been made possible by a structural reorganisation of the way services are delivered in the city to an area-based multidisciplinary approach.

"This allows staff to switch from one discipline to another depending on what is the most pressing task, but it does mean that a lot of them must work incredibly hard," he said.

Nazir said further efficiencies are expected from his directorate in 2015/16, but added that development control would be protected and new appointments made.

David Hughes, head of planning at Liverpool, said a "development boom" in the city had seen fee income rise from just below £2 million in 2011/12 to a projection of more than £3 million for this year.

Hughes added that his department would use temporary staff to bolster its core planning team until it is clear how long the boom would last.

He said he does not expect the planning team to face further cuts that would contribute to city mayor Joe Anderson’s savings targets because of the income it generates.

Draft budget plans floated by Manchester City Council present a similar picture. According to consultation data it has published, it expects extra income from greater numbers of planning applications and increased building control work to contribute £200,000 towards dealing with a predicted £59 million funding shortfall.

Rose, who is service director for planning and transport at Milton Keynes Council, said the combination of past efficiencies and economic recovery had resulted in "a lot of people doing a lot more hours".

"Most councils are back to pre-2010 levels in terms of their workloads, but their staffing levels are more like 75 per cent of what they were," she said. She added: "We may not be seeing new cuts but what we are seeing is the need to deal with the increase in demand."

She added that the jobs market for planners also appears to be a lot healthier, with an increase in staff moving from the public to the private sector. 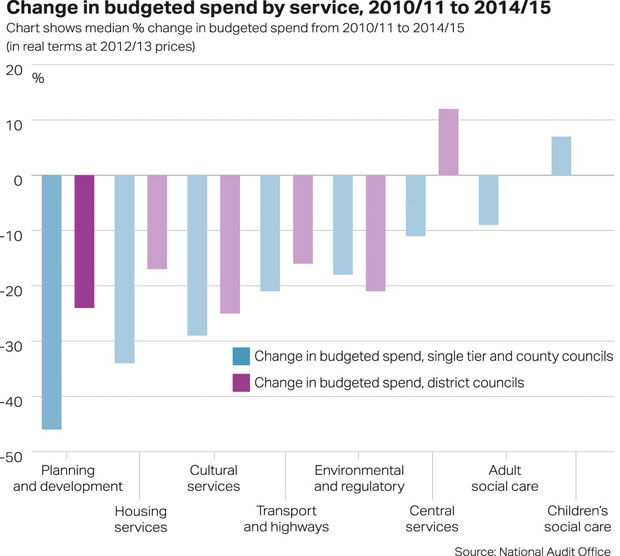