Following encouraging signals in the 2013 survey, most planning consultancies have again seen revenues rising over the past 18 months.

Among the 40 highest earners providing planning fee income details for both the past two years (see table opposite), 28 firms reported a rise in 2013/14, two indicated no change and just ten said fees had fallen. The top ten brought in £339 million between them in 2013/14; the equivalent last year was £283 million.

RPS Group remains the UK's highest-earning planning consultancy by some way. It was boosted by this summer's acquisition of CgMs, which posted a 2012/13 turnover of around £8 million. RPS business information manager Douglas Lamont stresses the growing need for environmental impact assessment (EIA) skills, particularly at the screening stage. He notes rising demand for specialist input on flood risk, land contamination and transport issues in prior approval applications under recent permitted development revisions. "Masterplanning is also a growth area, with our planners and environmental consultants advising on policy issues," he says.

A major EIA for HS2 through the West Midlands and a development consent order for the Thames Tideway Tunnel were mainstays for Atkins in 2013/14, says associate director Joanne Farrar. Its planners also worked on studies for new Thames crossings in east London and secured outline permission for residential redevelopment of Runwell Hospital in Essex.

Barton Willmore senior partner Ian Tant says a £5 million jump in fee income in 2013/14 came from extra housing, energy and commercial work. "Over the past 12 to 18 months, there has been something of a market correction, following the pretty serious downturn from 2008 to 2012," he reports.

Planning income was up by £2 million year on year at Savills, with anticipated growth of nine per cent this year. Operations manager David Jackson expects an uplift in all sectors, especially residential, commercial, leisure, energy and retail. At Turley, chief executive Rob Lucas says last year's £1 million rise was driven by much greater activity in residential, supported by higher volumes in energy, mixed use and leisure.

URS head of town planning Martin Herbert says the company's £20 million earnings in 2013/14 were up on 2012/13's undisclosed figure. But he warns that early signs of economic slowdown and of government delays to major investment decisions ahead of May's general election may have a knock-on effect on residential and infrastructure development programmes.

Pegasus Group business development manager Sue Corrigan says income has grown in 2013/14 with the workload rising in all sectors, notably renewables and environment. At Nathaniel Lichfield & Partners, managing director Jim Fennell says a £3 million fee hike last year was driven by residential, infrastructure and development activity in London. He foresees 15 to 20 per cent growth this year.

Just outside the top ten, AMEC director Clive Harridge flags up a "buoyant" 12 months in which the firm has significantly expanded its planning offer, especially in transport planning. "We have secured significant growth in the property and energy sectors and in major infrastructure planning," he reports.

SLR Consulting director David Sandbrook says his firm increased earnings by taking on more work, especially on major infrastructure, rather than raising fees. He predicts 12 per cent growth this year, led by grid connection and onshore oil and gas.

GL Hearn national head of planning Alastair Crowdy says his team's fee income has exceeded its financial projections in the past year. "We've put time and effort into ensuring that each of our sectors is in parts of the market with growth potential," he says. David Lock Associates' fees growth also topped expectations, and managing director Lawrence Revill sees the market growing ten per cent in the year ahead. "The run-up to the general election will be quiet, but then the floodgates will open," he predicts.

Indigo Planning managing director Philip Villars says his firm's slight drop in planning income last year was partly due to a fall in staff numbers. But he anticipates healthy results after recent hiring and growth in housing, mixed-use schemes and infrastructure.

Bidwells planning partner David Bainbridge detects continued growth in residential, strategic land, offices, research and development facilities and entertainment, including leisure centres and restaurants. DTZ has seen growth across all sectors, especially housing and education. "Fee income has grown substantially because we have more people doing more work and we expect it to do so again next year," says director of development consulting Mark Jackson.

As signalled in September's questionnaire, we have introduced a new check to the survey by calculating average takings per fee-earner for all firms providing income figures. On this count, the median rate is about £85,000. However, across the ten major firms claiming 175 or more planning fee-earners, only two showed average annual earnings under £100,000.

AXIS director David Clough says a high ratio of £191,000 per fee-earner was at least partly offset by "exceptional" costs in hiring subcontractors last year - including a barrister for a major inquiry - rather than clients taking them on directly. Quod's figure reflects above-average fee rates for the sector, which director Sue Willcox says are justified by long working days and some directors' unique expertise. "Very few firms are equipped to handle the complexity of the kind of projects we undertake, and our clients recognise that," she explains.

Evidence is limited on whether fees generated by chartered planners are higher than those accounted for by related professionals. However, data from Peter Brett Associates for the period from July 2013 to June 2014 suggest average earnings of around £98,500 across the firm's total of 116 planning fee-earners. On the same timescale, fees generated by the 52 members of its core planning team averaged just over £115,000.

The survey offers some encouraging signals for practice managers that fee rates could be starting an upward curve. Half of the firms providing information on this point said they pegged fee rates at previous levels in 2013/14. But 58 per cent say they have introduced, or are planning to bring in, rate increases in the current financial year - although only a third of these believe that customers will accept rises of more than five per cent. "It's still a very competitive market. Clients are still not prepared to sanction higher fee rates," says Sandbrook. 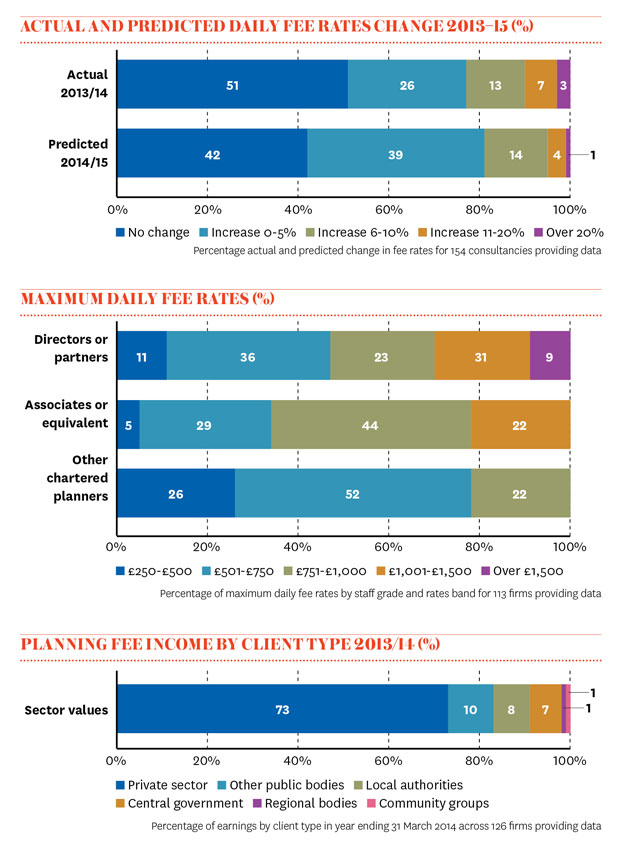