After five years of constraint, planning consultancy teams have grown significantly over the past 12 months. Chartered town planner numbers rose at all the top ten planning practices, taking the total to 956 - 102 more than in 2013 and accounting for 42 per cent of the 2,280 fully qualified planners registered in this year's survey.

This year's survey revealed 99 firms (see tables below) with four or more chartered town planners, fielding a total of 1,743 fellows or full members of the Royal Town Planning Institute (RTPI). We also received responses from another 31 firms with three chartered planners, 26 companies with two and 81 with just one, ranging from sole practitioners to larger specialist consultancies outside the planning mainstream.

With 134 chartered planners, Barton Willmore tops the staffing list again. While lower than the 166 recorded last year, this does not reflect contraction in the planning team, which grew by nine in the past 12 months. It results from an error in the firm's reporting procedure, which had overestimated chartered planner numbers for some years. The firm has provided revised estimates for this period.

RPS Group bolstered numbers by around 40 in taking over CgMs this summer. Business information manager Douglas Lamont says the CgMs brand will be kept for now, while its offer will improve through comprehensive support on environmental impact assessment (EIA) from RPS. He adds that RPS is actively hiring, "though whether numbers continue to increase over the year depends on how the economy performs".

Planner numbers are up by seven at Savills and operations manager David Jackson aims to recruit more over the next year. Its planning team is backed by another 50 or so non-RTPI fee-earners, with urban design and EIA the two main contributors. "For many of our large-scale and complex projects, these skills are essential," says Jackson.

RTPI-qualified numbers have dropped slightly at Turley, but chief executive Rob Lucas reports expansion in the firm's allied heritage, economics, sustainability and design teams. "They are all supporting the growth of our planning-related services business," says Lucas.

WYG Planning moves up two places in the ranking to sixth with this summer's acquisition of Alliance Environment & Planning, which reported 25 planners last year. Former Alliance director Steve Fidgett, who heads the combined team, expects a ten per cent rise in planners in the next year. He says WYG teams in London, Manchester, Southampton and the East of England have all grown (see map below), reflecting rising residential, commercial and large-scale infrastructure activity.

URS has seen a net increase of four planners this year. The figures supplied do not cover AECOM, which formally completed a takeover of URS last month. Head of town planning Martin Herbert says the firm expects to recruit on the planning side - which is supplemented by environmental and transport experts - during the next 12 months.

Capita stays in the top ten thanks largely to substantial teams running outsourced planning services for councils in Salford, Barnet, North Tyneside and Breckland, Norfolk. Meanwhile, the number of fee-earners at GL Hearn has been rising, with the firm taking on more staff in its London, Bristol and Manchester offices.

Arup's planning team has grown overall by four in the last year to 56 across nine regional offices. The firm's chartered planners are backed by more than 370 other fee-earners, including transport planners, environmental and sustainability experts and landscape designers. "These complementary skills are important to a rounded offer," says south of England planning team leader Nicola White.

After missing last year, Pegasus Group returns to the survey with 52 chartered planners, backed by urban and graphic design, environmental and technical staff. "We hope that our new London office will create a lot of business," says business development manager Sue Corrigan. Peter Brett Associates partner Nora Galley says her firm has dealt with a larger workload on major projects and development consent orders by recruiting at senior level.

Indigo Planning managing director Philip Villars says a drop of four in planning numbers since last September was due in part to full-time staff going part-time or joining clients after secondment spells. "We have been recruiting to fill these places, taking on people at all levels below director," he says.

At Atkins, associate director Joanne Farrar says a net fall of six planners reflects a six-month hiring freeze. "But we are starting to recruit again," she says. Farrar points to major growth at the Bristol office to handle growing nuclear and transport work.

Also back in the survey after a two-year gap is DLP Consulting, where full RTPI numbers have almost doubled since 2012. "We are planning for further growth due to a significant increase in work," says managing director Simon James. DLP has opened new offices in Leeds and Milton Keynes and is negotiating takeovers of two practices, James reveals.

Boyer Planning's team has grown by two this year, backed by 11 RTPI student members and eight other planning fee-earners, including urban designers and economists. "Finding the right people in certain areas is key because we want to grow as a nationally recognised multi-skilled planning consultancy," says managing director Jane Hirst, who aims to extend Boyer's regional net beyond its five current locations.

One major grower is Iceni Projects, up from 14 chartered planners in 2013 to 25 through external hires and graduate accreditation. Executive director Ian Anderson says hiring is likely to continue and an acquisition is possible.

Bidwells planning partner David Bainbridge says it has expanded planning teams in Cambridge, London and Milton Keynes. "There is more development activity in our main areas and the continued increase in the complexity of planning is driving demand for experienced services," he says.

New entries this year include Strutt & Parker, with big teams of planners in Chelmsford and Lewes, and Manchester-based HOW Planning, where six planning and environmental staff have joined in the past year. "Finding good-quality people, especially with some experience, has been challenging," says HOW managing partner Gary Halman. 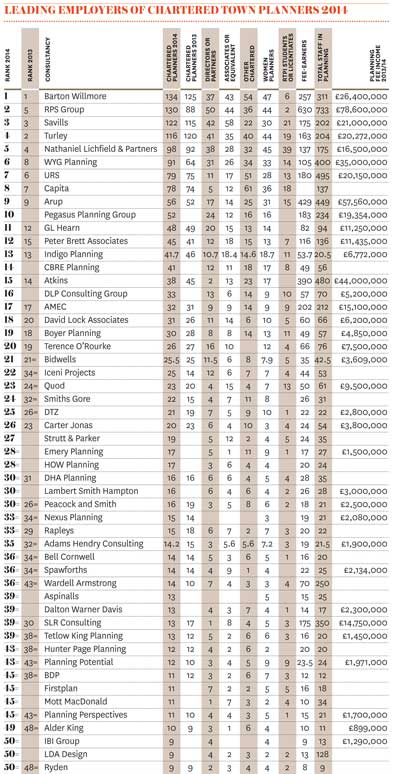 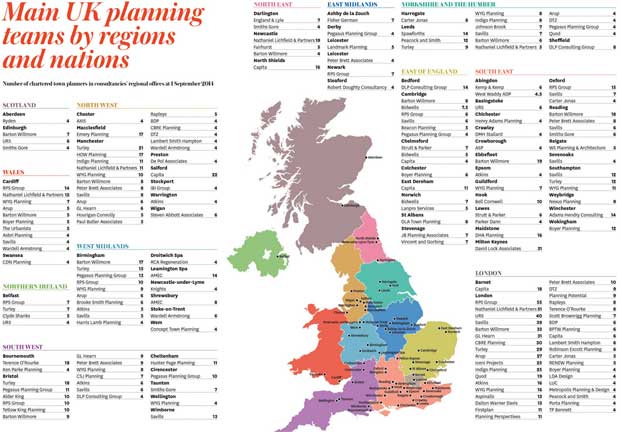