It has taken the planning sector a while to fight back from the economic downturn that began six autumns ago. But results in our 18th annual Planning Consultancy Survey suggest that the green shoots evident last year have sprouted.

The proportion of firms that believe the economic climate for development activity will improve over the next 12 months now stands at 91 per cent, against 82 per cent last year. Nine per cent were unsure, but none disagreed that economic prospects are essentially favourable for the industry. Equally encouragingly, 61 per cent of firms expect planning consultancy teams to grow this year, compared to 49 per cent last year.

There is a regional dimension to the recovery, with many leading firms identifying London, the South East, the East of England and the Bristol area as particular hotspots. This year's survey found 650 chartered planners operating from offices in London - 30 more than recorded in the 2008 survey, just before the downturn kicked in. Over the same period, the number based in Glasgow dropped from 84 to just 20.

Fee incomes have also been rising. Total planning income for the 134 firms declaring earnings stood at just over £497 million in 2013/14. Details supplied by 78 of these have enabled us to disaggregate around 80 per cent of the figure into individual market sectors (see graphic, opposite).

Most strikingly, demand for planning services in the residential sector has mushroomed. Disclosed fee income across this sector swelled by almost 40 per cent, from around £55.5 million in 2012/13 to £77.5 million in the last financial year. This not a like-for-like comparison, as the firms in each year's sample are not identical. However, the average residential fee income for firms providing data increased from £780,000 in 2012/13 to more than £1.1 million in 2013/14.

Earnings from greenfield and brownfield mixed-use projects, which typically involve substantial housing numbers, also showed continuing growth. Adding these two groups to residential fee earnings gives an aggregate fee income exceeding £137 million in 2013/14, more than a third of the total across all 23 categories of activity tracked in the survey.

Residential was the single biggest fee-earning area for four of the top ten earners in 2013/14. The housing and mixed-use sectors together accounted for a quarter of last year's earnings at RPS Group, a third at WYG Planning, 40 per cent at Nathaniel Lichfield & Partners and Savills, almost half at Turley and more than 60 per cent at Barton Willmore.

If consultants' predictions for 2014/15 are borne out (see bar chart, opposite), these three sectors will dominate growth. Stand-alone residential planning workloads are forecast to rise by 18 per cent, matching last year's reported growth, while mixed-use work is expected to grow by around ten per cent.

The consensus among consultants with knowledge of the other built development sectors is that these showed less spectacular growth in 2013/14, and predicted growth rates for this year are less buoyant. Compared to the 2012/13 results, fee income volumes increased by about £3.5 million for commercial and industrial projects, £3 million for retail planning and £2 million in the leisure sector.

Reported aggregate fee income also grew across the infrastructure sectors by around £40 million. About half of this was down to growth in transport planning, where large amounts are being spent on studies for the High Speed Two rail line and proposals for river crossings east of London. Looking ahead, consultants expect to see growth of around five per cent in the waste, transport, education and health fields over the year to next March.

Optimism over prospects for growth in water supply and quality projects is largely confined to a few major multidisciplinary practices involved in London's Thames Tideway Tunnel supersewer, which secured consent in September. Only four firms reported significant earnings in the minuscule telecommunications and outdoor advertising sectors.

In the energy sector, consultants conclude that market growth in 2013/14 fell far short of the 18 per cent forecast last year, and predictions for 2014/15 are half last year's rate. However, some firms in this area anticipate commissions in electricity grid improvements, gas pipelines and shale gas extraction.

Compared to built development and infrastructure, fee income in the remaining sectors is insignificant for most major planning practices. Steady growth is expected in environmental enhancement, help for councils in running development management services and heritage conservation, where the importance given recently to consideration of the impact of development on historic assets' settings is fuelling a need for professional advice.

Receipts from neighbourhood-level planning almost doubled in 2013/14 to some £4.5 million - a sure sign that consultancy expertise is being harnessed for the government's localism agenda. Earnings from involvement in district-wide plans and studies grew slightly last year, but the market view is that work at the sub-regional and regional scale declined in value last year and won't come back.

For the first time, this year's survey presents comparative information on average fee levels per planning fee-earner. The results (see tables, p29 and p31) offer interesting findings. The range of average takings per fee-earner varied hugely among the 132 firms providing plausible evidence of fee income from full-time occupation in planning consultancy, from as little as £15,000 a year to nearly £200,000.

At the lower end of the range, the average is pushed down by about 20 mostly smaller practices, including recent start-ups and practices in less profitable sectors or regions. However, 110 practices all averaged at least £50,000 per fee-earner in 2013/14, of which 36 showed average earnings of £75,000 to £99,000 and a further 46 - including eight sole practitioners - achieved six-figure sums.

These are healthy results by any standard, but could the brakes go back on for more expansion in the planning consultancy sector? A few commentators voice concern that next May's general election could mean ministers delay decisions on potentially controversial major projects. Other deterrents perceived by consultants include green belt constraints, high charging rates under the Community Infrastructure Levy and the opportunities offered by neighbourhood planning to obstruct development.

The message seems to be that consultants wanting to extend their business must proceed with caution. Controlled growth, combined with diversification into sectors where consultancies know they can offer vital expertise valued by clients, is the watchword for many practice managers at this stage.

The Planning Consultancy Survey 2014 was conducted during September by Planning's sister company DCS. Consultants were invited to respond online or to a paper questionnaire. This year, we clarified the data sought and the definitions used with extensive notes in the body of the form.

We received usable responses from 237 practices operating in the UK, employing a total of 2,280 chartered town planners. Where necessary, the figures supplied have been subject to rigorous checks to identify potential discrepancies or errors. In all, we conducted checks with around 40 practices on one or more aspects of their returns and, in some instances, requested staff lists to ensure that the figures tallied.

Ultimately, the reliability of the survey depends on the accuracy of the information supplied. We require responses to be personally vouched for by a named senior member of the firm. However, as an additional check, we calculated average fee earnings per planning fee-earner and invited major firms departing significantly from the norm to confirm or reconsider their figures. 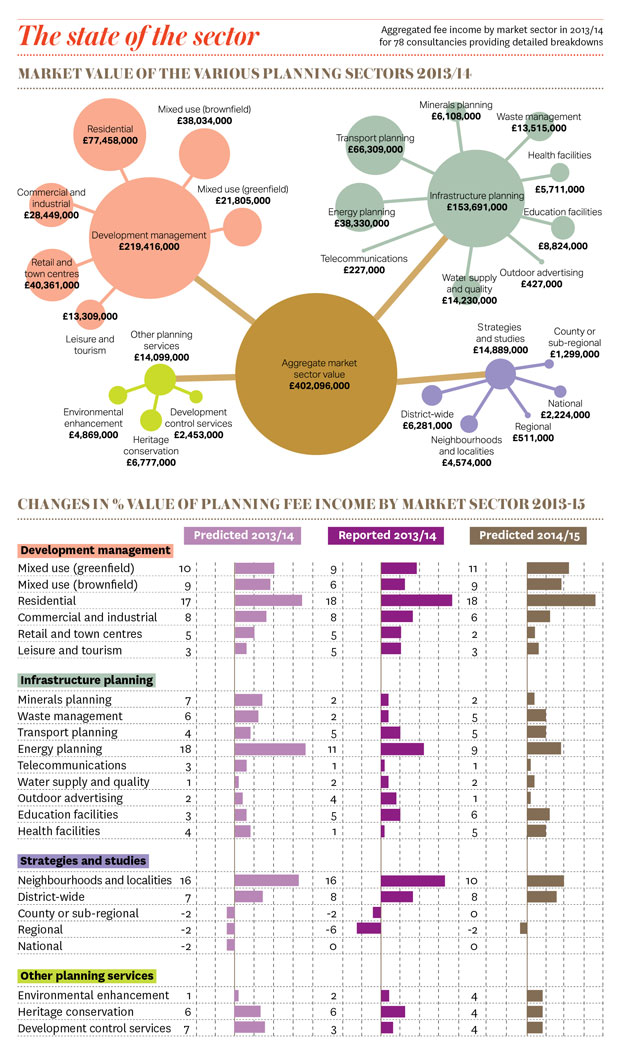