The Department for Communities and Local Government (DCLG) consulted earlier this year on proposals for a "deemed discharge" on certain types of planning conditions where the local authority does not make a timely decision.

In its response to the consultation, the government confirmed that it would proceed with the plans, which it said represent an "effective and proportionate response to the issue of delays in discharging conditions".

The proposed deemed discharge would only apply to conditions attached to permissions once they are granted and that require the further approval of the local authority on matters of detail.

According to the consultation response, the measure would mean that the condition would be treated as approved where a decision has not been made on the application by the local authority within a set period.

The response also said it would be inappropriate for deemed discharge to be available for all types of conditions and outlined certain exemptions. These include all conditions attached to development that is subject to an EIA (see panel below) or likely to have a significant effect on a qualifying European site, and conditions designed to manage flood risk.

Ghislaine Halpenny, assistant director at lobby group the British Property Federation, said the inclusion on the exemption list of developments that are subject to an EIA "neuters the impact of the deemed discharge".

She said: "It means that deemed discharge is only really relevant for small to medium-sized schemes. Any tall building, any large housing development or anything that would be probably be contentious will go through the EIA process and therefore will be exempt."

Michael Gallimore, partner at law firm Hogan Lovells International, said it would be disappointing that if a scheme is subject to an EIA then all conditions relating to the development are exempt from the deemed discharge process.

He said: "Any large scheme that has been through the EIA process will completely lose the benefit as no such schemes will be able to take advantage of this deemed discharge procedure.

"But it is not even the bigger schemes now that have an EIA. There are some medium-sized developments that still have to go through the EIA process. So there will be quite a large number of schemes that have a long list of conditions attached that will lose the benefit of these measures."

Gallimore added that a "climate of challenge" has grown up around EIAs, which prompts many developers to adopt a "cautious approach" when deciding whether or not to submit an assessment with their application.

"That means that there are an increasing number of schemes where EIAs are submitted and therefore all of those will lose the benefit," he said.

But Mike Kiely, chairman of the Planning Officers Society and director of planning at the London Borough of Croydon, said very large-scale schemes account for a "tiny proportion" of applications. "Not many schemes are subject to an EIA and obviously qualifying European sites are site-specific. I do not think that there are any in London, for example."

Phillipa Silcock, principal consultant at the Planning Advisory Service, described the government’s approach to exempt all conditions attached to a development that is subject to an EIA as "pragmatic".

She said: "On any large application that was subject an EIA there will be some conditions that could have been dealt with under the deemed consent regime. But it is impractical to try to split those up."

Environmental impact assessment (EIA) regulations require that an environmental statement is carried out for projects that are likely to have a significant effect on the environment before planning permission is given.

Such assessments are compulsory for major projects such as nuclear power stations, long-distance railway lines and larger airports, but the regulations also list more than 80 project types that only require an EIA if they are considered likely to give rise to significant environmental effects.

This group includes the category of "urban development", including residential and other schemes of an urban nature, which according to the government’s planning practice guidance account for by far the largest proportion of development in England that are subject to EIA. 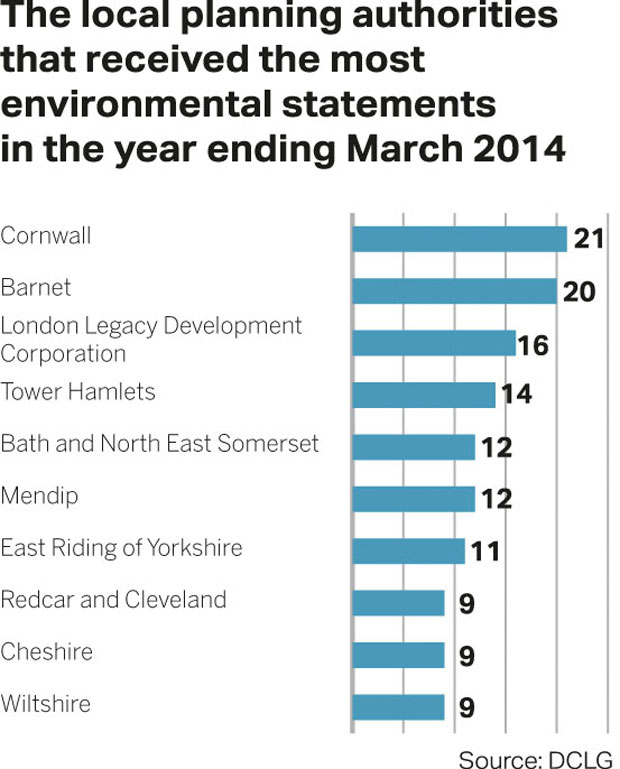