The government's Homes and Communities Agency (HCA)'s National Land Use Database last week revealed the total brownfield land and buildings that are vacant, derelict or in use but consented or allocated for development, as reported in 2012 and 2011. Analysis of the 2012 figures shows that 23,700 hectares of land were reported, but only 45 per cent of councils replied.

According to Planning's analysis, just over 40 per cent of the land is considered suitable for housing, with estimated room for 466,671 homes. The findings suggest that 1,021,000 homes could be built on such land if the pattern were repeated across the rest of England's 326 councils.

This does not reflect the full brownfield land capacity in England because the HCA's raw data do not include figures for previously used land and buildings currently in use with redevelopment potential but not consented or allocated.

HCA analysis of 2010 figures, also published last week, showed that in that year, such brownfield land would have added 25 per cent to total brownfield capacity, creating potential for 1.49 million homes.

Planning's analysis found that 45 per cent of the homes identified in the 2012 dataset already have permission. Meanwhile, a further 44 per cent are allocated in a draft or adopted local plan, meaning that only 52,902 homes, or 11 per cent, are without planning status.

The 2012 figures also show stark regional differences. A third of the potential brownfield homes are in London, with just two per cent each in the North East and East Midlands.

In a statement, the Department for Communities and Local Government commented that, following coalition planning reforms, more than two-thirds of homes are built on brownfield land, but the government still has further ambitions.

In June, ministers announced a fresh push to encourage councils to focus on developing brownfield land for housing.

Chancellor George Osborne said the government wants homes permitted on over 90 per cent of "suitable brownfield" by 2020, which he said could mean 200,000 homes.

Richard Pestell, a senior associate at consultancy Peter Brett Associates, said if England's household formation rate is 221,000 a year, 467,000 homes would meet just a couple of years' demand. He added: "It's wrong to assume that the data represent extra capacity."

He pointed out that the focus on developing previously used land for housing meant that brownfield stock is now "greatly diminished", while much leftover land is unsuitable for housing or is in low-demand areas.

He said: "It's important that we reuse brownfield land where possible, but there isn't enough of it to solve our housing problem."

Stuart Robinson, planning chairman at property firm CBRE, said: "All the major brownfield land sites in London are drying up."

Many such sites present ten years ago, such as Stratford, King's Cross, and Earls Court, are "gone", he said. "I can't see where the next big supply of brownfield is going to come from," he concluded.

Lobby group the Campaign to Protect Rural England, which wants to restore the brownfield-first policy, believes that there are enough sites to build 1.8 million homes.

Paul Miner, its senior planning officer, said the HCA data are "insufficient" to draw conclusions. He said: "We think that there is still a significant amount of brownfield land left, substantially more than what's identified here." 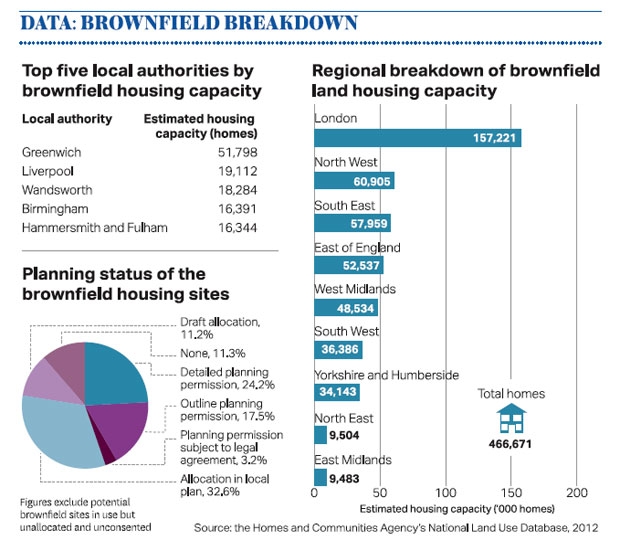