A new permitted development (PD) right allowing agricultural buildings to be converted to homes came into force in April. But official data show that councils refused 52 per cent of agricultural to residential prior approval applications in the three months after the introduction of the rules (Planning, 10 October, p4).

Under the PD rules, developers must notify their local authority to determine whether prior approval will be required in relation to the scheme’s transport, highways and noise impacts, the site’s risk of contamination or flooding, and whether the location of the building "makes it otherwise impractical or undesirable" to change the use.

But responding to concerns about varying treatment of such conversion applications by different authorities, Quartermain told the British Institute of Agricultural Consultants’ rural planning conference that some authorities had been "tempted" to consider other matters when deciding prior approval applications.

He told delegates: "Prior approval is not planning approval light – it’s permitted development. Local authorities can’t bring in matters that are not conditions."

Tony Kernon of Kernon Countryside Consultants, who also spoke at the event in Oxfordshire, said there has been "huge variation" in the treatment of prior approval applications, with strong opposition to PD rights at some councils. "Where residential is considered to be inherently unsustainable I can understand the resistance," he said.

The National Planning Policy Framework states that planning authorities should avoid isolated homes in the countryside.

Stroud District Council head of planning Phill Skill said this is a major factor in barn conversion plans’ rejection. He said his council will consider whether a building’s location makes it "impractical or undesirable" for it to change to a residential use. "It needs to be a sustainable location," he said. "We are trying to get as many people as we can next to urban extensions."

Discussing why prior approval bids for barn conversion are often refused, he said the biggest reason is applicants being overambitious about the curtilage of the building.

Planning was a media partner of the rural planning conference. 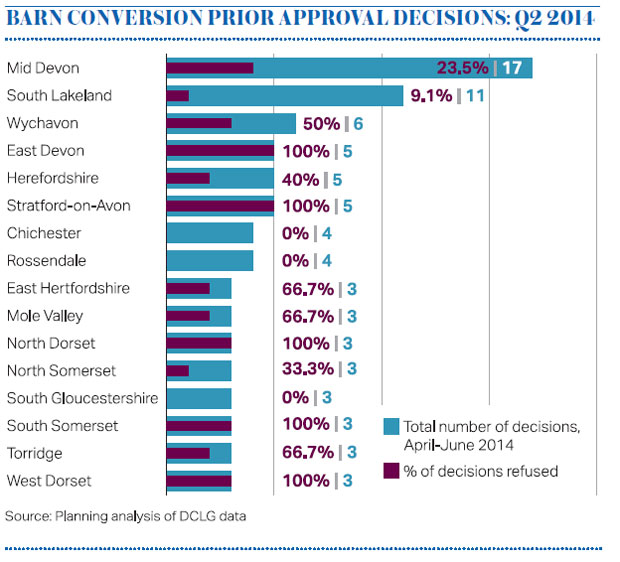