Under the policy, councils are placed in special measures if they fail to determine fewer than 40 per cent of major applications within 13 weeks over a two-year period. These measures allow developers to submit such applications directly to the Planning Inspectorate.

Last year, Blaby District Council became the first district authority to be placed in special measures. But new Department for Communities and Local Government (DCLG)statistics show that its performance has now improved above the 40 per cent threshold.

The official figures also show that Trafford Council, only designated a special measures authority in June, has now processed 56 per cent of "county matters" minerals and waste applications within the deadline. Both authorities have had the sanctions lifted.

The DCLG confirmed that the new data, for the period July 2012 to June 2014, will be used to decide the next round of designations for district authorities and councils handling county matters applications.

The DCLG told Planning it has written to the councils and given them until 17 October to set out why they should not face sanctions.

Amber Valley Borough Council said it does not agree with the figures and would be "providing evidence to show what the actual figures are".

A spokeswoman for St Edmundsbury Borough Council also said the details contained in the DCLG letter are incorrect, and its performance on major applications is above the 40 per cent threshold.

Christchurch Borough Council said there is an error in the data returns it had originally provided, adding that with the corrected data it had achieved a determination rate "of around 50 per cent".

Of the district authorities, only Bromsgrove District Council said the DCLG’s figures are correct. However, it stressed that it has been reforming its planning system in the past two years and its percentage of approved applications is up by ten per cent.

Of the county matters authorities, Milton Keynes Council said there was a data error in its returns to the DCLG, while Buckinghamshire County Council said it would fight the designation as its performance "is significantly better than the current representation in the database".

The DCLG said in a statement: "We have recently written to several councils giving them the opportunity to correct any errors or set out any exceptional circumstances that, in their view, would make a designation as underperforming unreasonable."

But experts have questioned the effectiveness of special measures. Tim Hancock, managing director at consultancy Terence O’Rourke, said: "The more authorities that go down this route, the more concern there would be about the democratic process. I am sure that the government is not very keen on using this unless it absolutely has to.

"Now it has come out with the stick it does have to use it when the criteria are met. But I do not think that it is a satisfactory solution. It treats the symptoms more than the underlying causes."

Ben Wrighton, development planning director at consultancy GL Hearn, added that the special measures policy "is doing something, but I am not sure if it is really getting to the root of the problem. This is a funding and resourcing issue." 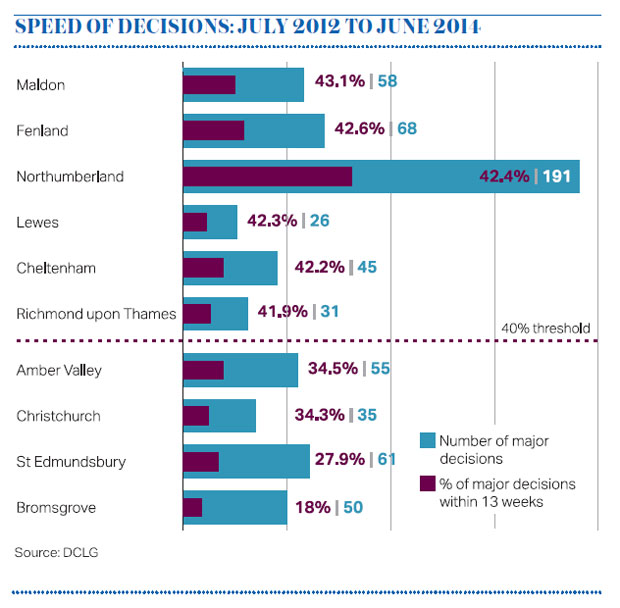