The level is now 51 per cent, while for a 41 to 45-hour week the figure is up from 21 per cent to 25 per cent. Planners are also working more than their allotted hours. In 2011, only 19 per cent of council planners worked six hours or more extra a week. Now it is 32 per cent.

Local authority respondents blame a drop in staff, as planners move to the private sector. "Local planning authorities are under incredible pressure to reduce costs," said one council planner. "Workloads are increasing as fewer staff do the same amount of work." Many respondents talk about public sector benefits "eroding". The survey found some support for this, but results are not uniform.The Planning Officers Society's Anna Rose says: "The benefits of working in the public sector have diminished with pension reforms and changes to terms."

The percentage of council planners receiving help to buy or run their own car dropped from 19 per cent in 2011 to 17 per cent, having already fallen from 39 per cent in 2007. But the proportion of local authority planners getting paid overtime has risen from five to ten per cent. In the private sector, this figure fell from eight per cent to two per cent.

The proportion of private sector planners getting bonuses has gone up from 24 per cent in 2011 to 43 per cent now. The percentage who benefit from pension contributions from employers has risen from 78 per cent to 88 per cent. For council planners, the most common leave entitlement is 26-30 days per year, but in the private sector it is 21-25 days.

Click on the image below for a full info-graphic 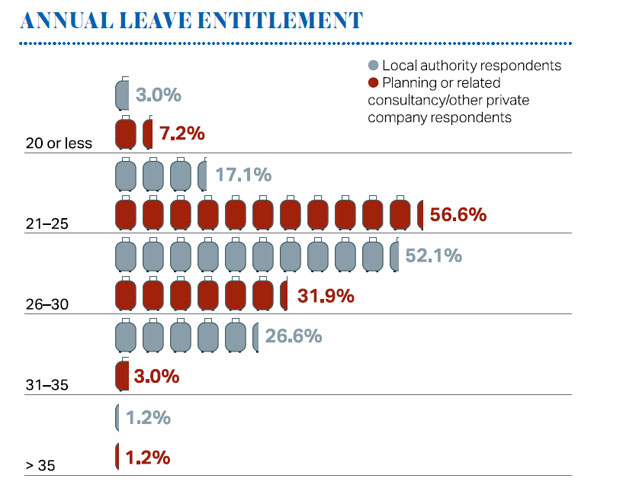