The gender gap was described as "disappointing" by Planning Officers Society junior vice-president Anna Rose. "In the public sector, job evaluation schemes have worked hard to redress the balance of the sexes," she said.

High-earning council planners are more common than three years ago, with 14 per cent on £50,000 or more, up from six per cent in 2011. But two times as many private sector planners (29 per cent) fall into this category.

However, twice as many planners in the private sector (20 per cent) earn below £25,000 than those working for councils, a difference that has widened since 2011. It may be that private sector planners take lower salaries early in their careers in the hope of greater rewards later.

Many council planners commenting in our survey complained about a relative stagnation in pay, and a growing gap with the private sector causing a talent drain. One wrote: "We have lost a large number of good-quality staff to the private sector as we are unable to compete on pay. The quality of staff in local authorities will inevitably decline."

Another added: "Local authority planners are paid abysmally in relation to other professionals." 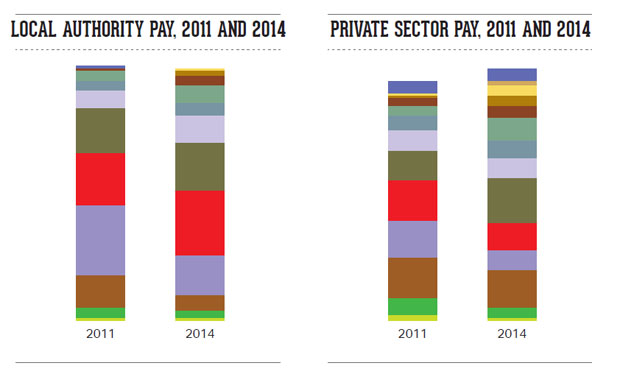