But Department for Communities and Local Government (DCLG) data show councils refusing a far higher fraction of agricultural-to-residential prior approval bids than those made under other recent PD right changes.

Duncan Hartley, director at consultancy Rural Solutions, said it is disappointing that councils are being so tough on barn conversion applications. "They need to appreciate the very important role residential conversions play in rural housing supply," he said.

Analysis of the data by Planning also shows that the proportion of office-to-residential and larger single-storey household extension prior approval bids backed or rejected varies widely from council to council.

Andrew Judge, cabinet member for environmental sustainability and regeneration at the London Borough of Merton, which refused 40 per cent of office-to-residential applications determined during the same period, criticised the prior approval process for not letting the council consider the developments' impact fully. "One potential result is inadequate and poor-quality development," he said.

Planning also found that the Royal Borough of Kingston-upon-Thames had refused the greatest proportion of prior approval applications for larger household extensions in the second quarter of 2014, with 51 out of 100 decisions being refusals.

A council spokesman said the two main grounds for refusal were the "impact of the extensions on residential amenity", where the council received objections, and cases where the extensions failed to meet PD criteria.

Mike Lowndes, executive director at consultancy Turley, said the contrast between councils highlighted where there is dissatisfaction about the loss of control that the PD rights represent.

This is causing frustration on behalf of developers, he pointed out. "The PD rights are not all they're cracked up to be. If a council wants to be difficult it can be," he said. 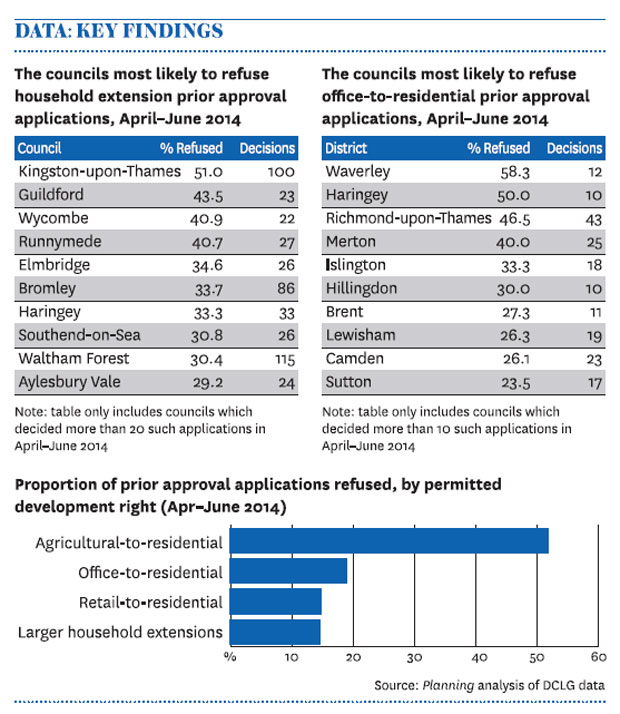