Of 18 projects rejected, 14 of the decision letters issued on behalf of the secretary of state cited harm to the landscape as a deciding issue, according to Planning’s analysis.

Eight of the decision notes mentioned concerns about harm to the settings of heritage assets such as listed churches, while in 12 of the decisions Pickles referred to visual amenity and the effect on living conditions at nearby properties.

According to figures published by trade association Renewable UK last week, the secretary of state has called in 50 wind farm appeals since June 2013 and of 20 decisions made, only two projects have been approved.

By giving more weight than inspectors to issues such as landscape and heritage assets, he has rejected six farms against recommendations to approve, claimed Renewable UK, which said it is concerned about "unprecedented" government interference in schemes.

One example of an appeal dismissed by Pickles against the advice of an inspector was the 25MW East Heslerton Wold scheme in Ryedale, which was refused permission in May.

Pickles attributed "considerable importance and weight to the desirability of preserving the setting of St Andrew’s Church", according to the decision letter.

But his note said the inspector’s description of the impact on the church’s setting as minor "underplays the degree of harm".

Renewable UK planning adviser Yana Boseva said there is a lot of uncertainty in the sector and a sense that there are "no rules to the game".

She pointed out that the issues being given weight are subjective that are hard to measure scientifically in the way that impacts such as noise can be.

Head of onshore renewables planning at law firm Eversheds Paul Maile agreed, adding that Pickles is substituting his judgement for that of inspectors without visiting the sites in question.

"In the current political climate it is extremely difficult to get approval," he said. "It is unprecedented in terms of the numbers of projects called in and the percentage of decisions being one way."

Former chief planning inspector Chris Shepley said considering that there used to be not more than 100 appeals called in within a year, for the secretary of state to intervene in 50 wind farm applications in a short period of time is "very unusual".

"That demonstrates a lack of clarity in the policy," he said. "If the policy is clear there is no need to call in cases. The fact that he is overturning inspectors’ recommendations again shows that he needs to be upfront about what his policy is."

Pickles announced in April that a six-month period of greater ministerial involvement in wind farm appeals would be extended for another year. The measure was intended to ensure that decisions by the Planning Inspectorate are in line with government guidance.

The increase in projects being recovered and then turned down has led to criticism that the planning process for energy schemes has become politicised.

Founder of energy firm Ecotricity Dale Vince told Planning that the intervention "seems entirely about votes" and suggested that more renewable projects would have been built if the coalition government had not come to power.

Patrick Robinson, partner at law firm Burges Salmon, said a ramping up of refusals without a change in policy was exercising people. "When there’s a noticeable change in the statistics everyone wants to know why," he said.

Robinson suggested that the only kind of scheme that could be approved would be something where there was "negligible local opposition". He added: "Most cases will have some vocal opposition, so that’s going to be rare."

Communities minister Kris Hopkins said: "Inappropriately sited wind turbines can be a blot on the landscape, harming the local environment and damaging heritage for miles around.

"The government has intentionally and transparently changed planning guidance and appeal ‘recovery’ rules to ensure that these issues are better taken into account." 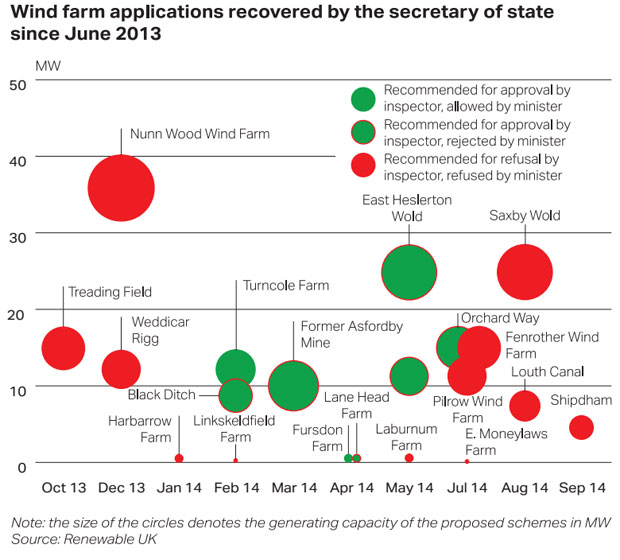