According to the act, local authorities must decide whether a nominated asset has a use that "furthers the social wellbeing or social interests of the local community" before adding it to their ACV register.

If any land or building listed is ever put up for sale, community groups have six weeks to submit a bid request, then a six-month moratorium to prepare one. ACV status can also be a material consideration in planning decisions.

Of the 134 councils in the DCS figures, 87 had received at least one ACV application. In total, these authorities had received 616 applications, made 550 decisions and listed 433 community assets, the analysis reveals.

If this pattern were to be repeated across England's 326 local planning authorities, there would be more than 1,000 assets listed.

Pubs top the list with 155 approved, almost three times more than the second most popular asset, community centres. Pubs make up 36 per cent of all the assets listed, the analysis shows.

The average approval rate for listing nominations is 79 per cent, but Planning's figures show variations across different assets.

Pubs, for example, have an 88 per cent approval rate, whereas only around half of open space nominations succeed. All but one of the 15 libraries nominated have been listed but just 50 per cent of health centres.

Some of the more eye-catching assets to be listed include three public toilets. However, a train station, a petrol station and five nominations for offices have all been refused.

Industry experts said the high num-ber of pubs listed reflects a high-profile campaign by the Campaign for Real Ale to get pubs registered as ACVs.

Victoria Du Croz, senior associate at law firm Hogan Lovells, said the high average approval rate showed that achieving ACV status is an "easy hurdle to cross". This success rate is due to the legislation's "broad test" of what constitutes an ACV, she said.

Barrister Scott Stemp of 12 College Place chambers said the government had aimed for a high number of listings by drawing the criteria so "widely". He added: "If car parks can be included in the remit of an ACV, then anything is up for grabs."

Du Croz said that, apart from pubs, most listings were "reactive", with communities nominating buildings or land in response to development proposals. This would explain the high number of car parks and open spaces, she argued. Stemp agreed that development pressures are a "large driver" behind the most popular listings.

Annemarie Naylor, head of assets at umbrella body Locality, pointed out that publicly owned buildings such as libraries are more likely to be passed into community hands under the Community Asset Transfer process.

This process involves a transfer at less than market value, often through long-term leasehold, unlike the Right to Build in which assets are sold on the open market. Naylor suggested that this mechanism could explain the relatively low number of libraries listed.

She also suggested that the lower approval rates for open spaces could be a result of development pressures causing some local authorities to sell them off for housing, sparking community opposition. Stemp said the high number of car parks nominated is probably a result of residents' perception that they are "softer targets for redevelopment". 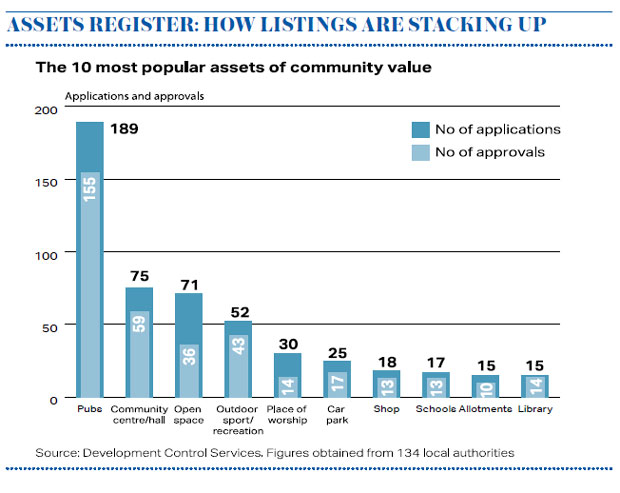