The London Borough of Newham’s strategic development committee granted planning approval for the mixed-use, business-led development at the Royal Albert Dock on Wednesday.

The applicants hope to transform the Royal Albert Dock into the capital’s next business district, creating up to 20,000 new jobs, aimed at investors from Asia.

The approval involves a detailed application for phase one of the scheme and outline planning approval for the remainder of the site.

The first phase of the development includes up to 49,000 square metres of business space and 180 flats plus a central square.

The outline plan further promises to make about 1km of waterfront accessible and create eight new public squares and a dockside promenade.

Sir Terry Farrell said: "Historically the trading heart of the capital, this development will re-instate the Royal Docks as a commercial and trading centre for the 21st century.

"The masterplan creates a state-of-the-art business district for financial, high-tech and knowledge driven industries which will act as a catalyst for the transformation of the wider Royal Docks and East London continuing the legacy of the London 2012 Olympics."

Farrell said there would be "over 3 million square feet of high quality work, living, retail and leisure space with over a kilometre of activated waterfront".

ABP chairman, Xu Weiping, said the firm would invest £1 billion in the scheme which would "transform this derelict site into London’s next business district, bringing significant social and economic benefits to the local area".

"It is a huge step forward for the wider regeneration of the Royal Docks," he added.

Xu said there has been "high demand from China and the Far East" and the firm hoped to complete the first phase by 2018.

Meanwhile, plans have this week been submitted to Newham Council for a mixed-used development at nearby Silvertown Quays, also in the Royal Docks (see visualisation below).

The outline application, submitted by The Silvertown Partnership and drawn up by consultancy Quod, proposes 3,000 new homes, commercial space, community buildings, restaurants and shops, across a 62-acre derelict site.

In a statement, the partnership said the plans would create up to 21,000 jobs and contribute £260 million annually to the London economy. It also said the area would become a visitor destination.

The application proposes the restoration of industrial building Millennium Mills which would "form the heart" of the new development. Also included is a new bridge connecting Silvertown Quays with the planned Crossrail station at Custom House. 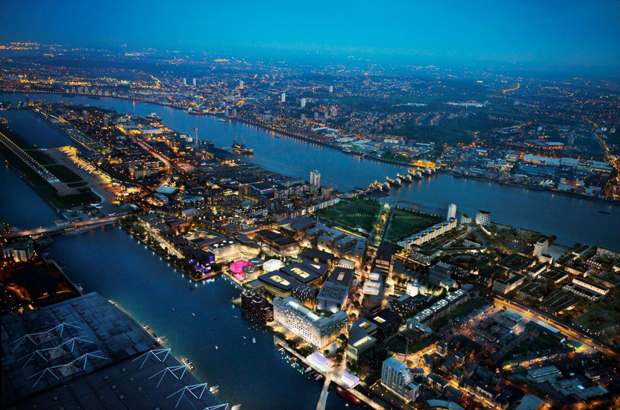 The deputy mayor for housing, land and property, Richard Blakeway, said: "The mayor is overseeing a massive regeneration of the historic Royal Docks returning them to their former glory as a centre for industry and innovation at the heart of the capital’s economy.

"The transformation of Silvertown Quays is part of a huge drive from the Mayor to kick-start development on publicly owned sites across the capital to boost the supply of new homes for Londoners and regenerate local communities."