Last month, chancellor George Osborne announced that councils would be "required" to put local development orders (LDOs), which allow authorities to specify certain kinds of development that receive planning permission in advance, "on more than 90 per cent of brownfield sites that are suitable for housing".

Osborne announced a £5 million fund to help English local authorities create the first 100 sites with LDOs. But the Treasury also warned the government would consult on measures to enforce the policy, "including allowing developers to apply directly to central government where councils have not done enough to remove planning obstacles on brownfield sites".

The DCLG's chief planner Steve Quartermain told Planning last week that officials were still working on the implementation of the new policy, intended to result in planning permission for 200,000 homes by 2020, but added that he believed councils would be in the driving seat in relation to the designation of sites as "suitable" for housing.

"The chancellor made it clear that it's something local authorities will lead on," he said. "They already know what land they have."

Quartermain's comments were endorsed by a DCLG spokeswoman, who said: "It is for local authorities to determine what areas are best for their houses". The spokeswoman added that it would be "ridiculous" for the department to look at "every site in the country and ask every council whether or not they're going to build on it".

Planning minister Nick Boles told MPs this week that the policy "absolutely will not undermine localism".

"LDOs have to go through the same local consultation as any other local planning permission," he said. "It's absolutely something that is driven locally and led by local councils."

Pickles said a set of "templates" for smaller brownfield sites would be provided by the government to support the roll-out of residential LDOs, which have yet to be used by local planning authorities to speed the delivery of new housing development.

According to a report commissioned by the Planning Advisory Service, 80 per cent of the 65 LDOs in force across 41 councils at the end of 2013 related to employment uses (see infographic).

The most recent figures from housing and regeneration quango the Homes & Communities Agency's database of previously development land show that, in 2009, local authorities had identified an estimated 61,920 hectares of brownfield land, of which 50 per cent was potentially suitable for housing and could potentially provide around 1.5 million homes.

According to the figures, London is the region with the greatest proportion of previously developed land that is suitable for housebuilding (96 per cent), while Yorkshire and the Humber has the lowest proportion, at 32 per cent.

Research from planning consultancy Nathaniel Lichfield & Partners (NLP), published in May, suggested around a million new homes could be delivered on brownfield sites over the next 15 years.

However, the figures showed that around a fifth of the brownfield sites outside London were located away from already built-up areas.

NLP senior director Matthew Spry said he believed LDOs would help some sites, but would not alone be able to drive housebuilding across the country.

"The evidence so far suggests LDOs can be a potentially viable tool for specific sites, but the jury is out on whether they can be supplied on such a large scale as implied by this announcement," he said. 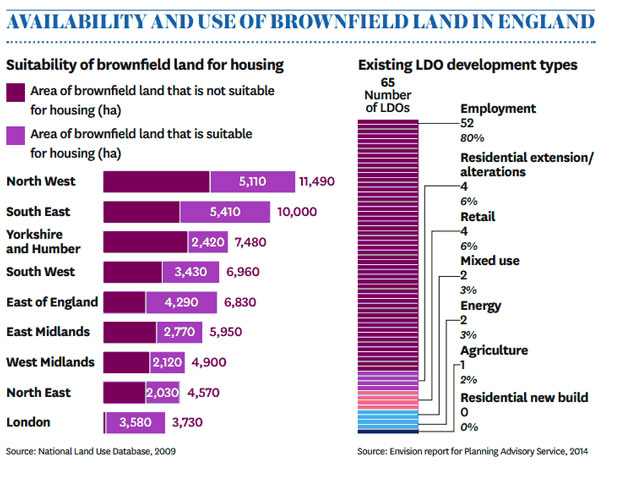