Many of the lawyers also point to an increase in judicial reviews in planning and environment cases. It may be that government action to cap claimants' costs, in response to criticisms that the UK was contravening the requirement of the European Aarhus Convention that access to environmental justice should be affordable, is fuelling the rise in judicial reviews.

For the first time, we have ranked local authority legal departments according to respondents’ rating of how they deal with their workload

The new process for Nationally Significant Infrastructure Projects (NSIPs) is also responsible for generating a significant workload for lawyers. These projects are inherently complex and have in several cases resulted in court action.

These are just some of the areas in which local authorities, developers and third parties needed legal advice in the past year. Our legal survey is intended to help clients find good sources of such advice by identifying the firms and individuals most highly rated by other planning lawyers and professional planners. 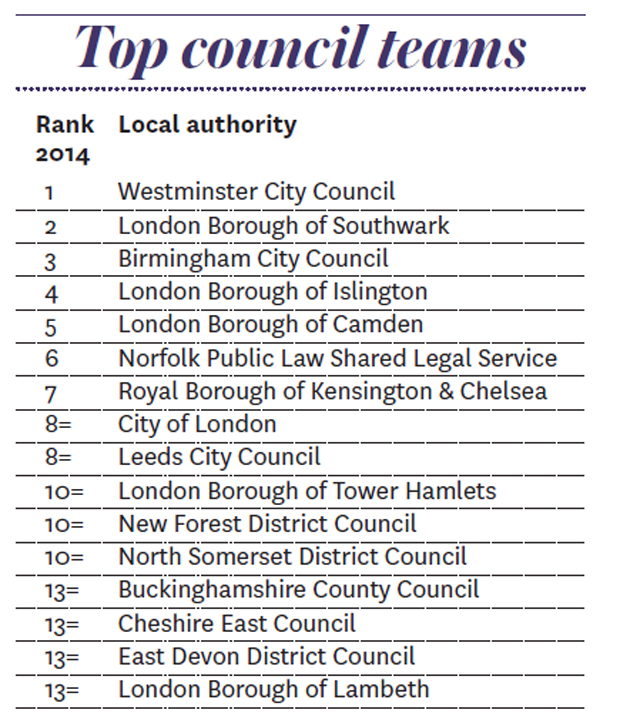 Solicitors were not allowed to vote for their own practice, or individuals working for it, while barristers could vote for no more than three members of their own chambers. We weeded out almost 180 unsolicited responses, which suggest concerted canvassing on the part of some lawyers. But the votes that were counted have been checked as coming from individuals the magazine knows to be in a position to comment credibly.

From the results, we have once again produced rankings of solicitors' firms, individual solicitors, Queen's Counsel, junior barristers and juniors under 35. We have now been producing these rankings for many years, and you can read the results in the following pages.

As a new element of the survey this year, we have for the first time also ranked local authority legal departments according to respondents' rating of their ability to deal with their workload in an exemplary manner (see table).

Numbers of votes for individual public sector solicitors were not sufficient to produce a full table. But Deborah Cluett, comptroller at the City of London Corporation, and Stuart Evans, head of environment, development and planning law at Birmingham City Council, were jointly the most mentioned. They were followed by Louise McLaughlan, senior legal adviser at the London Borough of Camden.

Mark Hynes, president of Lawyers in Local Government, says some London local authority planning solicitors have seen a rise in workload due to dealing with regeneration projects such as the redevelopment of Battersea Power Station, the Nine Elms area in Vauxhall and the Crossrail rail link. Elsewhere, councils have been kept busy by the furore around fracking, he says.

Read the rest of the survey below:

Our survey reveals the legal firms and individual solicitors who are most highly rated in the sector. More.