Under a clause in the Act, which came into force last April, developers can appeal to the Planning Inspectorate (PINS) if they believe the affordable housing requirement made as part of a section 106 (S106) planning gain agreement renders a scheme unviable. PINS said that eight appeals have now been launched under the new mechanism.

The planning obligation was made in 2010. But Redrow wanted Torridge District Council to reduce the affordable housing content of the development from 60 to 31 homes and remove references to shared ownership from the S106 agreement. The council maintained that the site could provide 55 affordable homes.

Redrow wanted a profit margin of 20 per cent to ensure viability, while the council proposed a rate of 17.5 per cent. The inspector suggested a compromise of 18 per cent, which would mean that Redrow should build 36 affordable homes.

He also agreed to remove the requirement for some homes to be in shared ownership.

The other project that has been allowed to change its affordable housing element is Mast Pond Wharf in Woolwich, which involves the redevelopment of the South East London Aquatic Centre site to create a scheme including a 16-storey tower of 100 flats (DCS number 200-001-440). The London Borough of Greenwich asked for 20 affordable homes in the original permission.

But developer Mast Pond Wharf Ltd asked for the complete removal of the affordable housing element, which it said would result in a profit margin of ten per cent. The inspector agreed.

In the final appeal to be decided, two members of the public demolishing a farmhouse and barn to construct 14 homes had asked for all four affordable homes to be dropped from the outline planning permission granted by Cornwall Council (DCS number 200-001-500).

The inspector concluded that, since the permission was outline, it was premature to base a viability assessment on it because the final developed project could be quite different to that assessed.

Another three appeals being considered by PINS are by the same housebuilder, Kensington Developments. One of these, in St Annes, Lancashire, has been withdrawn after the firm reached an agreement with Fylde Borough Council.

The other two are both in Blackpool. One concerns a scheme of up to 584 homes in Marton Moss, the other a scheme of 83 homes at a farm. In both cases, the developer is disputing the financial contribution it agreed with the city council towards off-site affordable housing. Hearings on both appeals took place last week, but have been adjourned until 20 January.

PINS said it has not yet validated the final two appeals, so it was unable to provide details.

Home Builders' Federation head of planning Andrew Whitaker said councils were being more pragmatic about renegotiations since the new appeal route was opened up. He denied that housebuilders were trying to evade building affordable homes. He said: "It is not 'how do I do less affordable housing on this site'. It's 'how can I make the site viable?'" 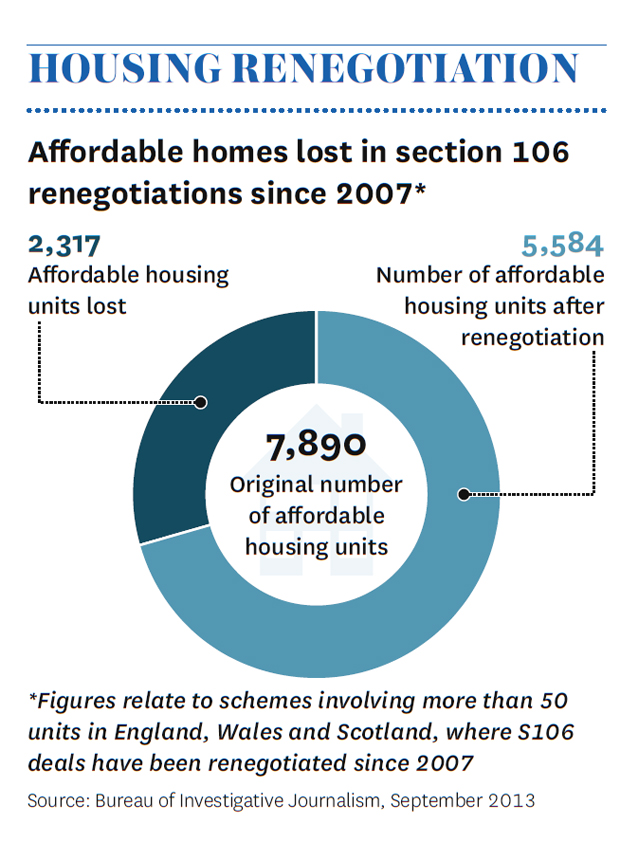