Planning inspector Jessica Graham had concluded that the benefits of the development, including a 150-berth marina and up to 200 homes in Exhall, would "very clearly" outweigh the harm. She said it would result in the "very special circumstances" necessary to justify green belt development.

Graham described Nuneaton and Bedworth Borough Council's housing land supply shortfall as "severe" and found that the provision of a large area of public open space on previously private land would "greatly enhance the beneficial use of the green belt".

But Eric Pickles disagreed and refused to allow the appeal. He said that, while he saw "considerable merit" in the proposals, the benefits of the development "would not clearly outweigh the harm to the green belt".

However, Pickles awarded full costs against the council, as it had refused permission for the scheme on the basis of unsubstantiated objections. Although the appeal site was in the green belt, this was not one of the council's reasons for refusal.

The decision is the first to be taken by Pickles on a major green belt housing scheme since he warned in July that inspectors and councils were not always giving the green belt the "sufficient protection that was the explicit policy intent of ministers".

A written statement, issued on behalf of Pickles in July by communities minister Brandon Lewis, said that the secretary of state "wishes to make clear that ... he considers that the single issue of unmet demand ... is unlikely to outweigh harm to the green belt".

The marina scheme's lead planning consultant, Jonathan Adams, a director at consultancy Tetlow King, said: "We were quite clear from the start that we could not rely on a lack of a five-year housing land supply to justify this scheme". He added: "We had hoped the number of benefits that were to be provided would outweigh the harm to the green belt."

Jason Towell, partner at law firm Cripps Harries Hall, said: "Green belt is increasingly seen as sacrosanct and very difficult to get permission on." He said that the decision raised questions over what particular "very special circumstances" might bring Pickles to permit green belt housing development.

Pickles' refusal of the green belt plans came as he approved schemes in Cheshire, Staffordshire and Lancashire totalling more than 1,200 homes (see infographic). In each case, he ruled that the local councils were unable to demonstrate a five-year supply of deliverable housing sites.

Jeremy Cahill QC of No 5 Chambers, who acted for the appellant in the Staffordshire case, said that if an inspector considers that a council does not have five-year housing land supply and the secretary of state agrees, "most of the difficulties raised against a case fall away".

Bernard Greep, a director at consultancy Peter Brett Associates, said that Pickles' recent decisions suggest he is affording greater weight to proposals where he considers there to be a serious and significant housing land supply shortfall. "If, as a council, you haven't got anywhere close to a five-year supply, you are under massive pressure," he said.

The full text of these decisions is available from compasssearch.co.uk or email dcs@haymarket.com 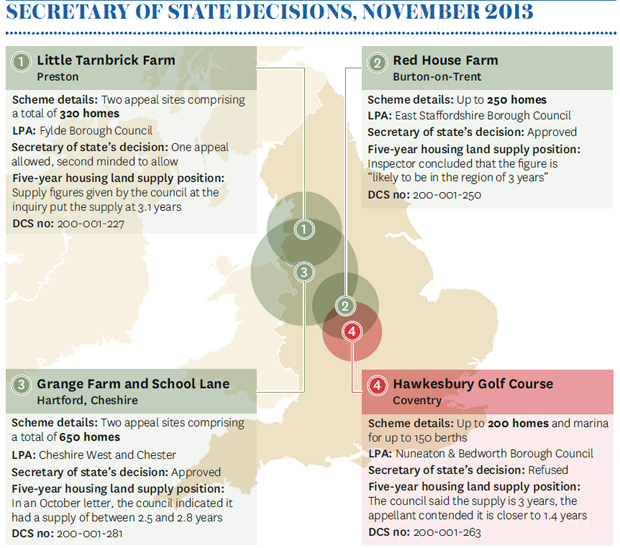