The minister's letter, sent earlier this month to council chief executives, stresses the importance of solar energy in meeting the UK's renewable energy targets. But Barker also wrote: "I am keen for the focus of growth to be firmly on domestic and commercial roof space and previously-used land."

Barker said he is "very aware of concerns raised by the public about the potential growth of large-scale solar farms, particularly where approval does not appear to take full account of the latest planning guidance". "Such inappropriately sited solar photovoltaics (PV) is something that I take extremely seriously and am determined to crack down on," he added.

The Department of Energy and Climate Change (DECC) is planning to publish a solar strategy next spring, Barker stated in the letter. But in the meantime, the government will closely monitor planning decisions on solar energy to ensure it is not sited in "inappropriate parts of the countryside", the letter added.

In October, communities secretary Eric Pickles pledged to personally intervene in more renewable energy appeal cases. The following week he dismissed an appeal for a 24MW solar farm in Suffolk against the recommendation of an inspector. However, since then he has not recovered any more solar farm appeals for his own determination, according to the Planning Inspectorate.

The letter to councils follows a similarly worded letter sent from Barker to Conservative MPs in October.

Stuart Andrews, a partner at law firm Eversheds, said that the timing of Barker's letter was interesting as there are an increasing number of applications for solar farms across the country. The letter shows the government is very aware of the balance between the need for renewable energy and concerns of communities, according to Andrews.

"They're being upfront about that balance in a way that they weren't with onshore wind," he said.

Ben Cosh, managing director of solar farm developer TGC Renewables, which has developed 14 solar farms in the UK, said that the letter was sensible. "Greg Barker is under pressure from backbenchers. He has laid down the gauntlet to us and said if the industry can't be responsible he'll put tougher guidelines in place," he said.

Applications for solar farm development in England have risen steeply since 2010, according to an analysis of DECC figures by Planning (see infographic). In 2010, only 33 planning applications were submitted for solar farms, none of which was above 5MW in capacity.

But in the first nine months of this year, there have been 278 planning applications for solar farms, the analysis reveals. Proposed projects range in size from 100KW, which is typical of a community energy project according to the Solar Trade Association (STA), to a 41MW project in the Vale of White Horse, Oxfordshire.

Approval rates for solar farm planning applications have dropped from 100 per cent in 2010 to 82 per cent this year, according to the figures.

Cambridgeshire and Dorset currently have the largest amount of solar generating capacity in the planning system, with 146MW currently proposed across district authorities in each of these counties.

Cornwall, meanwhile, has the highest number of projects currently in the system at 15. Applications for all of these are with Cornwall Council, which has developed specific planning guidance on several renewable energy technologies. It is currently consulting on a supplementary planning document on how to assess the landscape impact of solar farms and is hoping this will be adopted by next March, according to Ellie Inglis-Woolcock, senior planner at Cornwall Council.

In August, the STA published best practice guidance on the siting of solar farms. DECC meets with solar farm developers and environmental campaign groups twice a month. Cosh explained that the solar industry is being careful about dealing with local communities. "Everyone thinks the wind industry didn't get it right," he said.

However, according to Cosh, lack of grid capacity will constrain the growth of solar farms before local opposition becomes a major problem. The grid in Cornwall, where the UK market first took off in 2010, is already nearly full, he explained. 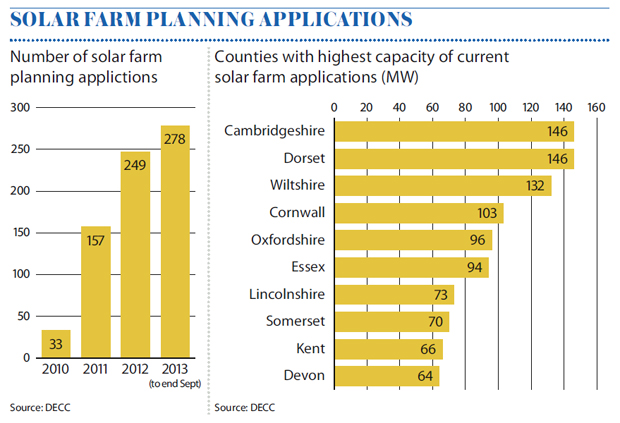