Since the National Planning Policy Framework (NPPF) came into effect last March, local authorities have been under increased pressure to produce up-to-date development plans to guide housing growth in their areas.

The NPPF emphasises that, if councils are without updated plans and fail to provide five years' worth of land for new homes, a presumption in favour of sustainable development kicks in. Authorities in such circumstances face a far greater risk of developers gaining permission through appeal for major housing schemes that councils have either refused or failed to determine - even on sites outside local plans. Here, Planning takes a look at the largest "unplanned" housing developments - on sites unallocated in local development plans - that the government has allowed on appeal since the NPPF came into force.

1. Gilden Way, Harlow 1,200 homes and primary school on the edge of town

Housebuilders Barratt, Persimmon Homes and Taylor Wimpey appealed against Harlow Council's failure to determine the scheme. Part of the 63-hectare site, on agricultural land, was designated in the council's 2006 local plan as green belt. The rest was earmarked for development, though of which type was the main bone of contention at appeal.

The applicants argued that the part of the site on which they proposed to build homes was earmarked for development in the local plan. The council's case was that the site was not specifically reserved for housing, and any housing release should done be through the local plan process. But the inspector said there was "abundant evidence that the council and local residents have known that this (housing) is the type of development which was being considered".

Phil Waite, Harlow's portfolio holder for the environment, said the council is now preparing a new local plan and "ultimately the site will be included as one of the options". Consultant Matthew Clarke of Boyer Planning said the site would provide "much-needed housing" and "deliver significant investment in social and physical infrastructure" including up to 360 affordable homes, a new primary school, and open space.

Developer Kennington PT Partnership appealed against Fylde Borough Council's non-determination of a 1,150 home development on greenfield land. The site was not allocated for development in the council's 2005 local plan. The council opposed the scheme, saying it conflicted with the local development plan and was inappropriate for the green belt. Secretary of state Eric Pickles cited the NPPF in his 2012 decision letter, which said that refusal would run counter to the framework's requirements for schemes to be approved where plans are out-of-date and councils are unable to demonstrate a five-year housing supply. Fylde only had a housing supply of 1.4 years. He also approved an application by Lancashire County Council to build an associated link road to the M55 motorway.

Mark Evans, Fylde's head of planning and regeneration, said the site was now being included for potential residential development in the preferred options for the emerging local plan. Consultant Tony McAteer, acting on behalf of the applicant, said: "The scheme will help resolve traffic congestion and meet housing needs in a highly sustainable location."

3. Shottery, Stratford-upon-Avon 800 homes and shopping centre on the edge of town

Applicants JS Bloor Homes and Hallam Land Management appealed against Stratford-upon-Avon Council's refusal of outline permission for their scheme, sited on 54 hectares of farming land. Although the council argued that the site was not included in its emerging core strategy, the applicants pointed out that the site was identified in the 2003 local plan as a strategic reserve to help meet housing needs after 2011.

The relevant policy was saved by the council in 2009 and only abandoned in the third draft of the core strategy after the planning application had been refused, against the advice of planning officers. Pickles said the development was not premature because the local plan was at a very early stage of preparation and the scheme would "meet a significant unmet housing need in a sustainable location".

In July, the council failed to overturn the decision in the High Court. Chris Saint, council leader, said the proposed development "undermines" the setting of the nearby Anne Hathaway's cottage, the home of Shakespeare's wife. Consultant Owen Jones, a director at Boyer Planning, said it was "an urban myth" to suggest the Shottery site was outside the local plan. He said: "The continuity of housing supply that this scheme will provide is clearly a very important factor in an area where, historically, house building has been restricted and affordability has worsened."

4. Ridgeway Farm, Swindon Up to 700 homes plus green space and a primary school

Housebuilder Taylor Wimpey appealed against Wiltshire Council's non-determination of the scheme, on 27 hectares of farmland. The council and neighbouring Swindon Borough Council both objected to the location of the site in the countryside. They argued that there was no specific allocation for it in any adopted or emerging development plans and the proposed development would be premature in relation to the progression of their core strategies. Though the draft Wiltshire core strategy, which was examined over the summer, did not allocate the Ridgeway Farm site, Pickles noted that the site had been considered in previous development plans for housing. A government letter said Pickles gave "significant weight to the fact that the framework indicates that, in the absence of a five-year housing land supply in an up-to-date, adopted (development plan), planning permission should be granted for the proposal".

A Wiltshire Council spokesperson said: "The council was disappointed considering the site should have come forward through a plan-led approach. However, since the appeal we have sought to work with the developer to secure high quality design and integration with the adjoining Swindon urban area."

A Taylor Wimpey spokesman said the scheme would provide "high quality homes", adding: "As well as providing much needed homes for the local area, our proposed scheme will provide a significant boost to the local economy through the creation of jobs and the provision of financial contributions towards local facilities, services and infrastructure."

5. Deans Farm, Bishop's Cleeve Up to 550 homes plus a high street

Developer Welbeck Strategic Land appealed against Tewkesbury Borough Council's non-determination of the case. It was considered alongside another appeal for a neighbouring site in Bishops Cleeve for 450 homes that was also allowed. The letter from Pickles said the proposals were "contrary to development plan policy" because both sites were "outside any development boundary". But because the development plan was "dated" the weight of this issue "should be significantly reduced". Pickles said "the most significant material consideration is the housing land supply" and the fact the council could not demonstrate a five-year land supply. In February, Tewkesbury unsuccessfully challenged both decisions in the High Court. It argued that the Localism Act meant local authorities' views should now be entitled to greater weight than other material considerations.

Tewkesbury Borough Council's development manager Paul Skelton said though "disappointed with the appeal decision", the council "respects the secretary of state and the High Court's decisions". "We look forward to working positively with the developers to eliver a high-quality development," he added. Consultant David Barnes, director of Star Planning and Development, said the "sustainable" scheme would meet the area's housing shortfall and provide benefits to the village including the delivery of affordable homes, "extensive" open space and sports pitches.

Building on unallocated Land: How much does it matter?

Experts disagree over whether development outside local plans is of lower quality compared to schemes on unallocated sites.

Michael Hepburn, a senior associate director at consultancy Nathaniel Lichfield & Partners, said in his experience there was no difference in quality. He said the National Planning Policy Framework (NPPF) provided adequate tests in terms of sustainability and design to ensure that quality remained high even for unallocated development, and added that the pre-application engagement and consultation process as well as the formal planning process gave councils and communities "plenty of scope" to have some control over such schemes. "The last thing we want is for people to think that development outside an adopted plan is automatically poorer quality," he said.

Planning lawyer David Heales, an associate at Clyde & Co, said: "It is a fundamental tenet of the plan-led system that it provides for departure and/or exception. Of itself, this has not adversely affected the quality of development coming forward."

But Dr Hugh Ellis, chief planner at campaign group the Town and Country Planning Association, expressed concern that housing developments were being approved on appeal. He said: "If we want high quality communities over the long term, that can't be done in a piecemeal way." Provision of housing through permissions of individual sites or individual development plans are "going to be pretty hit and miss", Ellis said, and "will never deliver enough". He said the NPPF had resulted in the private sector winning more housing appeals and expressed concerns about whether developments "are in the right place, of the right quality or achieving any affordable or social housing".

Consultant David Barnes, director of Star Planning and Development, which represented the applicant in the Clevelands appeal, said he expected unallocated sites to continue coming forward for development so long as there were still shortages in housing land supplies and delays in adopting local plans. 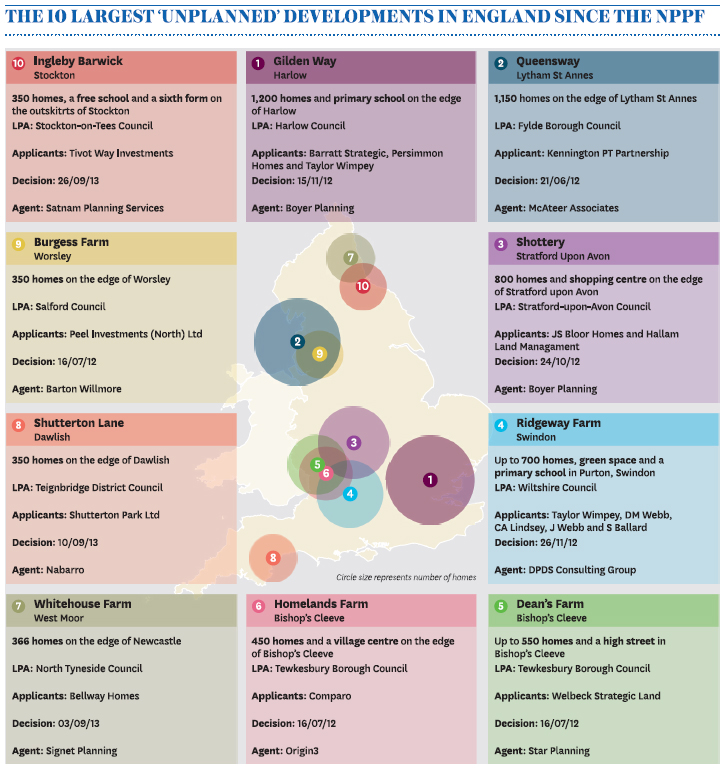