A survey of the first councils to have introduced Community Infrastructure Levy (CIL) charging regimes reveals that the London Borough of Redbridge has issued CIL liability notices with the highest combined value. The borough has issued 221 notices worth £8.1 million since it started charging CIL at the beginning of 2012, the survey found.

Eighteen of the 26 councils with CIL charging regimes in place at the end of last month responded to Planning's survey. Overall, the councils that responded to the survey had issued 1,178 liability notices worth a total of £33.6 milion.

The research reveals that the average value of the liability notices issued by the authorities is £28,568.

However, the survey found a significant variation in the average value of liability notices at different charging authorities. For example, the eight liability notices issued by Plymouth City Council since it brought in its CIL charge in June 2013 have an average value of £3,015, while the 11 notices issued by the London Borough of Brent since it started charging the levy in July average more than £186,000 in value.

The survey found that as well as issuing CIL liability notices with the highest combined value, the London Borough of Redbridge has also collected the highest amount of CIL to date: £1.4 million. In total, the councils that responded to the survey had collected £3.7 million.

According to the survey, the London Borough of Croydon has issued more liability notices than any other local authority - 294, worth a total of £2.9 million, even though its charging regime went live only in May.

CIL is payable on commencement of development, while liability notices are typically issued when planning permission is granted. On average, the councils that responded to Planning's survey had collected 11.1 per cent of the value of the liability notices they had issued.

Portsmouth City Council said it had collected 90 per cent of the CIL it has issued notices for. The London Borough of Brent, Bassetlaw District Council and Havant Borough Council said they have collected no CIL to date, but their regimes have been in place only since this summer.

Mike Kiely, the London Borough of Croydon's head of planning, said he was not surprised that his authority topped the table of notices issued because of the high level of development proposed in the south London borough.

He said the council had been keen to introduce CIL as soon as possible, as it was projected to raise more revenue than the former section 106 planning gain system, where only about seven per cent of developments attracted contributions.

"We think that we'll get twice as much money through CIL as section 106, and that will enable us to deliver more infrastructure," he said.

However, Kiely added that while the developers of small projects would be required to make a greater contribution under CIL, there are potential issues surrounding its ability to provide infrastructure for major developments when the cost of the required infrastructure exceeds that generated by the charging regime.

Stephen Webb, planning partner at law firm King & Wood Mallesons SJ Berwin, agreed, adding that there was a widespread belief among local authorities and developers that CIL would fail to provide infrastructure in the way section 106 agreements had previously done.

He predicted an uncertain future for the levy after April 2015 - the deadline by which all local planning authorities are required to have charging schedules in place - arguing that the mechanism is likely to be demonstrated by then as not sufficient to provide the infrastructure it is intended to.

Gerard Coll, dedicated CIL officer at Wycombe District Council, was more upbeat about the levy. His authority has issued notices worth £3.5 million in the 12 months since its charging regime has been in place - the third-highest value of any council.

Coll said the amount, which derives from about £2 million in proposed residential development and £1.5 million in retail, was slightly higher than the authority had predicted.

"We're also finding that our CIL regime means that planning officers need less involvement from legal colleagues than under the previous system," he said.

THE LATEST ON THE LEVY 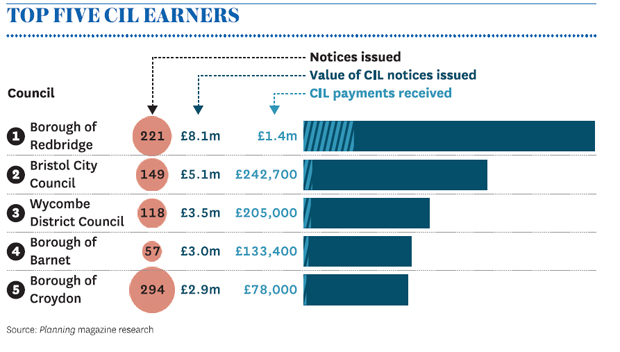