Under the policy, authorities will be designated if they have determined fewer than 30 per cent of major applications between July 2011 and June 2013 within 13 weeks. In such cases, developers will have the option of submitting their applications straight to the Planning Inspectorate.

Last week, the Department for Communities and Local Government (DCLG) announced that only one district council, Blaby District Council in Leicestershire, has been placed in "special measures".

It was also expected to announce designations for "county matters" authorities that deal with minerals and waste applications, such as county and unitary councils and London boroughs.

But in a letter, Ruth Stanier, the DCLG's director of planning, told county matters planning heads that designation would be postponed for six months until the end of April.

A DCLG spokesman said that over the next six months, the department would "continue to monitor county matter performance and take two further quarters of data into account".

When it published preliminary performance figures in September, 26 county matter authorities were placed under threat of the designation. At the time, DCLG invited authorities to make representations about whether the data was correct. A new table, published last week, showed that just 14 authorities are now under threat.

Stanier's letter said a "significant proportion" of the county matter authorities contacted "asked for corrections to be made to the data that they had submitted", and there was also "some confusion over the definition of major county matter development being used".

It added: "It is important that any assessment is both fair and robust."

The letter said the postponement was to "provide time for us to work with county matter authorities ... on the quality of data which has been supplied". The department would "also take the opportunity to clarify the definitions that should be worked to".

The updated performance table was "based on the data corrections that have been agreed", the letter added.

The key concern, Wotulewicz said, was over the government's new distinction between different types of major applications, which had created confusion among some authorities.

Following Leicestershire Council's representation made after the initial table was published, its figures were adjusted from ten per cent up to 52 per cent, according to Wotulewicz.

Don Gobbett, Dorset County Council's head of planning, said: "We welcome the postponement to enable us to sort out the criteria and come to a sensible agreement."

The September table for district councils showed three authorities - Worthing, Halton and Blaby - below the threshold.

James Carpenter, Blaby Council's development services manager, said it had taken a positive approach to working with applicants, without being bound by "arbitrary timescales". He said its figures showed it was now above the 30 per cent threshold.

The government figures placed Worthing Council just under the special measures ceiling but it won a reprieve on the grounds of "exceptional circumstances". James Appleton, head of planning, said the council successfully argued that it was not responsible for delays on three major applications.

Halton Council moved out of the danger zone, according to the new figures. A spokesman said this "vindicated" its assertion in September that it was determining more than 30 per cent of major applications within the deadline.

Planning minister Nick Boles said: "We're pleased a number of authorities raised their game and for the time being are out of risk." 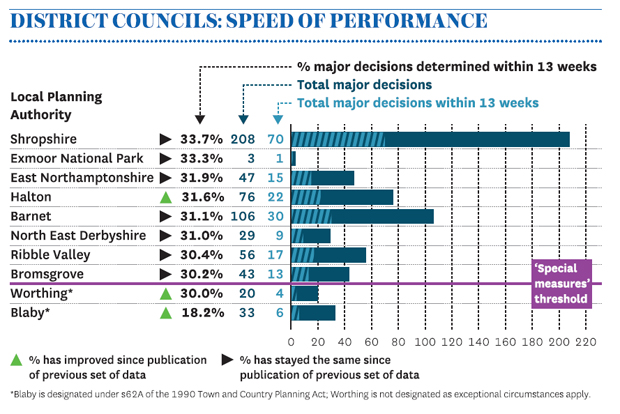