Last month, a judge dismissed a challenge against the London Borough of Hackney's decision to list a disused pub as an Asset of Community Value (ACV), in the first tribunal hearing of its kind.

Under the Localism Act's community right to bid, community groups can nominate land and buildings with a current use that furthers the "social wellbeing or interests" of the community.

Once registered by a local authority, if an ACV is ever offered for sale, community groups have firstly six weeks to submit a bid request, then a six-month moratorium to prepare the bid. Property owners objecting to the listing of their building as an ACV can appeal first to the council to review its decision, then to the Property Chamber's First Tier Tribunal.

Hackney Council listed the Chesham Arms, which has been closed since October 2012, as an ACV in March 2013 after a request from the Churchwell Residents' Group. But the owner of the pub, Mukund Patel, launched an appeal against the decision.

Jonathan Mail, head of public affairs at the Campaign for Real Ale (CAMRA), said that the tribunal ruling has set a "powerful precedent". He said: "Any developer is going to face an uphill battle in trying to appeal a council's decision to list a pub as an ACV."

Graham White, Hackney Council's assistant director of legal and democratic services, told Planning that there was a technical argument at the tribunal hearing over what "realistic" meant.

Under the Localism Act, requests to nominate an ACV must pass a test that it is "realistic to think that there is a time in the next five years when there could be non-ancillary use of the building or other land that would further ... the social wellbeing or social interests of the local community".

White said that the owner's representatives had contended that "realistic" meant that something was "likely" to happen, whereas the local authority's counsel argued that the term meant "more than fanciful".

White said that the judge has yet to hand down his verdict in writing, so it is not yet clear whose argument he backed. But he added: "If a judge has decided that realistic is 'more than fanciful', then the world and his wife will use that as a benchmark."

Paul Breen, a senior director in real estate firm CBRE's pubs and licensed property team, added that it might not be easy for pub owners to prove that it would not be realistic for their properties to have a future as a pub, even where they are no longer fit for purpose.

"At what point is a pub viable?" he said. "It's a very subjective argument if you haven't got hard evidence and there's always going to be a counter-argument to that."

Michael Pocock, partner at law firm Pinsent Masons, said that the judge's decision suggested that owners of pubs would "find some difficulty in preventing listing unless they have some compelling financial data".

James Watson, secretary of the Save the Chesham campaign, said: "I would think that this ruling would deter those from seeking to buy a pub to change its use from a community function to a private use, unless they already have planning permission."

Non-statutory government guidance on ACVs says that it is open for councils to decide whether a listing as an ACV is a material consideration if a change of use application is submitted. The status has so far been considered by decision-makers in only a handful of cases (see panel, left).

HOW ACV STATUS HAS FIGURED IN PUB PLANNING DECISIONS

Plans to convert a historic public house in Farnborough to a McDonald's drive-through restaurant were approved last month, despite the building being listed as an Asset of Community Value (ACV). Rushmoor Borough Council's development control committee voted to approve the change of use of the Tumbledown Dick Hotel, which has been vacant since 2008. The building was designated as an ACV in February 2013, with the owners of the site having since lodged an appeal against the listing to the First Tier Tribunal.

But the officer's report to the committee concluded that "little weight" should be given to the ACV designation in determining the proposal. The report said that it does not appear that there is any "immediate prospect" of the community buying the property.

In September, Wiltshire Council blocked plans to convert the Peterborough Arms in Chippenham - which had been listed as an ACV in June - into a single dwelling. An officer's report to the authority's northern area planning committee had recommended that the change of use application be refused, contending that the proposal would "result in the detrimental loss of a local service with a realistic prospect of viable community use".

The report cited in its conclusion that "regard should be paid in particular to the prospect of a community bid to purchase and operate the pub". The report added that the "realistic prospect of a timely and significant enhancement of the property suggests that the application is premature". 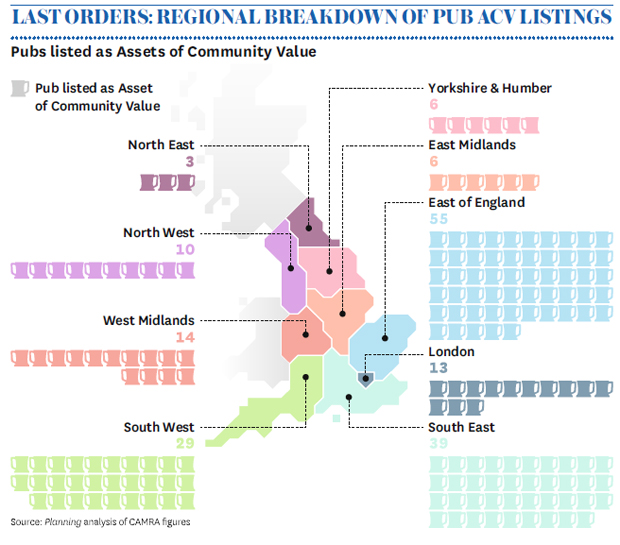