The government has intervened in a total of 17 appeal cases in the past week through the recovery process. The projects range in size from single 100-kilowatt turbines to five-turbine wind farms.

The interventions follow a pledge by Pickles to recover more renewable energy cases in England. In a written ministerial statement at the end of last week, he said that the criteria under which he recovers appeals on renewable energy applications for his own determination will be revised with immediate effect. The new criteria will be reviewed after six months, the statement added.

"I want to give particular scrutiny to appeals involving renewable energy developments so that I can consider the extent to which new practice guidance is meeting the government's intentions," Pickles said.

Tory MPs such as Daventry member Chris Heaton-Harris have complained that the Planning Inspectorate (PINS) has ignored a statement by Pickles in June saying that the need for renewable energy should not override environmental protection and local communities' concerns.

However, analysis of appeals decided by PINS since the statement was issued shows that 17 onshore wind farms have been approved in England, while 13 were dismissed.

A spokeswoman for trade body Renewable UK said: "We're unsure why there's a need for more recoveries from PINS, which now has clear guidelines to help it make decisions."

The new criteria do not mean that all renewable energy appeals will be recovered, Pickles stressed. He has not intervened on any solar farm appeals, a spokesman for PINS confirmed.

The new rules mean that much smaller projects could be affected, according to lawyers spoken to by Planning. Elizabeth Dunn, partner at law firm Burges Salmon, said: "It's adding to the complexity of the process and people's ability to plan and invest in projects."

Pickles' latest intervention follows seven wind farm recoveries in June. The first of these cases was determined last week, when Pickles dismissed plans for two wind farms in Cambridgeshire and Lincolnshire in a conjoined appeal involving six turbines. Pickles agreed with the inspector's recommendation that the projects' impact on the landscape and nearby residents was too great.

Meanwhile, climate change minister Greg Barker was quoted by the Sunday Telegraph as saying that he would write to all local authorities and tell them that wind and solar projects should not be approved in areas of outstanding natural beauty (AONBs).

However, neither the Department of Energy and Climate Change, the Department for Communities and Local Government (DCLG) nor Barker's special adviser, Maria Allen, could confirm whether there was a new policy on renewable energy projects in AONBs. The latest DCLG guidance on renewables, issued in July, states only that proposals for renewable energy projects in AONBs will need "careful consideration". 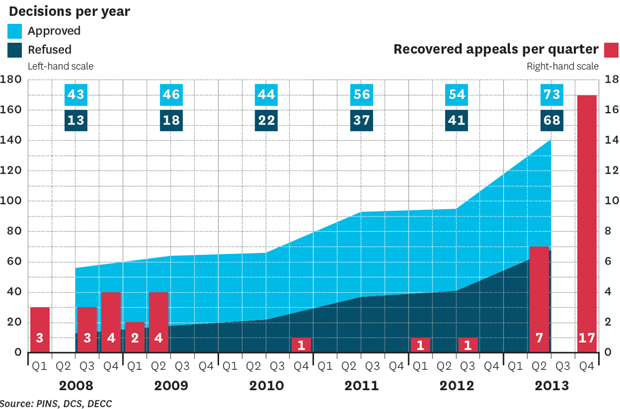