From April 2014, local authorities' ability to seek financial contributions through the use of section 106 agreements will be limited.

From this date, a council will be able to pool no more than five contributions from separate permissions for an item of infrastructure not funded by the Community Infrastructure Levy (CIL).

An analysis of data compiled by Planning's CIL Watch blog reveals that, six months ahead of the April 2014 deadline, 58.3 per cent of local authorities in England and Wales have yet to take the first step towards preparing a CIL by publishing a preliminary draft charging schedule for consultation.

Only 5 per cent of councils have started charging the levy, according to the CIL Watch data. A further 8 per cent of authorities have submitted their charging schedules for examination, the analysis reveals.

Melys Pritchett, an associate director at real estate firm Savills, said that the experience of councils that have already started charging CIL suggested that, if a local authority has yet to publish a preliminary draft charging schedule for consultation, it would not be in a position to start charging by April 2014.

"If they haven't published a preliminary draft charging schedule by now, they definitely won't make April 2014," she said.

Pritchett warned that the Planning Inspectorate may not have the resources to cope with the number of CIL charging schedules nearing the examination stage. She said: "It's a really big problem that's brewing."

The CIL Watch data also reveals wide regional disparities in the progress made in implementing the levy. In London, 84.8 per cent of boroughs have published CIL plans for consultation. But in the North West the equivalent figure is only 15.3 per cent and in Wales just 9.1 per cent, the analysis shows.

In April, the Department for Communities and Local Government (DCLG) published proposals to push back the deadline for scaling back the use of section 106 agreements to April 2015, giving councils an extra year to get their CIL charging schedules in place. It has yet to announce whether it intends to implement the new timetable.

Margaret Baddeley, senior associate director at consultancy Nathaniel Lichfield and Partners, said some councils believed that they could produce a more substantive evidence base if they were not forced to rush to meet the April 2014 deadline. "They are not in a tearing hurry," she said.

Baddeley added that some authorities, particularly those in rural and coastal areas, had decided not to produce a charging schedule "full stop". She said that such local authorities, where little major development takes place, have concluded that they will be able to rely on the scaled back section 106 arrangements to fund infrastructure post April 2014.

In a report published last week, business leaders said that the April 2014 deadline must be removed to boost regeneration.

The report, published by the Confederation of British Industry, said: "Local authorities that have not yet implemented it should have the option of delivering site-specific planning obligations through section 106 agreements, with the deadline for transition to CIL removed."

41.7% - The proportion of councils in England and Wales to have published CIL proposals for consultation

The latest on the levy

The London Borough of Greenwich: consulting on a preliminary draft charging schedule until 8 November

Epsom and Ewell Borough Council: consulting on a draft charging schedule until 4 November 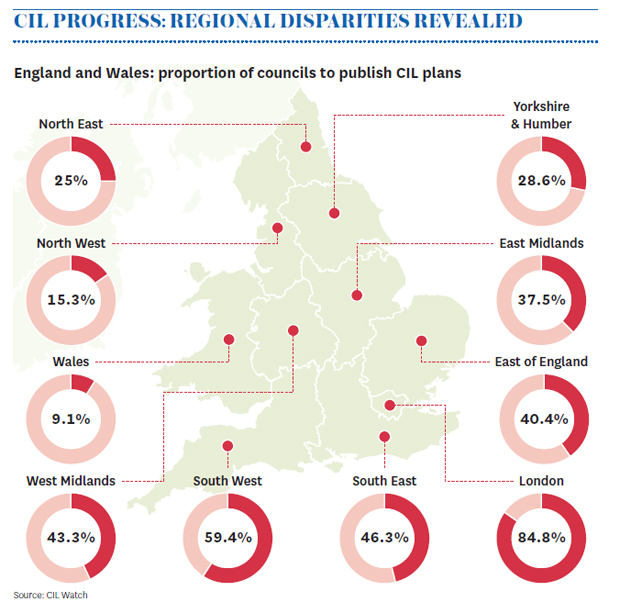