Examiner Simon Berkeley has published his report on the CIL proposals drawn up by three Central Lancashire authorities. The report, published last month, warns that charging schedules, drawn up by Chorley, South Ribble and Preston City Council, "do not provide an appropriate basis for the collection of the levy in three areas as drafted". The report said that a proposed £10 per square metre charge for apartment development and an "all other uses" category should be reduced to zero as it would "threaten the viability of those uses in the three areas concerned".

Examiner Jill Kingaby has approved the London Borough of Harrow’s charging schedule. The examiner’s report said that the charging schedule provides an appropriate basis for the collection of the levy in the area and would not put the overall development of the area at risk. She said that no modifications are needed to meet the statutory requirements.

The London Borough of Hillingdon has requested a suspension in the examination process of a period of six weeks to provide an opportunity for comment on modifications to its draft charging schedule. Amendments have been made to clarify the proposed charging rate for retail uses and to add maps showing the designated centres where a nil CIL charge will apply.

The London Borough of Newham has submitted its draft charging schedule to the Planning Inspectorate for examination.

Teignbridge District Council in south Devon has also submitted its charging schedule to the inspectorate for examination. Geoff Salter has been appointed as the examiner.

West Dorset and Weymouth and Portland Councils have submitted their draft charging schedules to the Planning Inspectorate for examination, expected to be held in September.

Epsom and Ewell Borough Council in Surrey is consulting on its preliminary draft charging schedule until 19 August 2013. The document proposes a single rate of £125 per square metre for residential development and a charge of £150 per square metre for convenience retail. Consultancy Peter Brett Associates produced a viability study for the local authority.

Spelthorne Borough Council, also in Surrey, has published its preliminary draft charging schedule for consultation. The document, out for consultation until 13 August 2013, proposes three charging zones for residential developments. Residential schemes with fewer than 15 units would be charged at either £100, £140 or £160 per square metre. The respective charges proposed for schemes with more than 15 units are £0, £40 and £60 per square metre. The document also proposes a £120 per square metre charge for out-of-centre larger convenience based supermarkets and superstores and retail warehousing. Consultancy the Dixon Searle Partnership prepared a viability study for the local authority.

Newcastle-under-Lyme Borough Council and Stoke-on-Trent City Council have published a joint preliminary draft charging schedule for consultation until 5 August 2013. The document proposes four charging zones for residential development, with rates of £0, £20, £50 and £80 per square metre. It also proposes a district-wide rate of £100 per square metre for retail development. The Nationwide CIL Service produced a viability assessment for the two councils.

Councils embark on second round of CIL consultation…

With two Surrey councils among the latest to unveil their infrastructure levy plans, now seems a good time to examine progress made in drawing up CIL charging schedules in the South East. The map (below) – which displays data compiled by Planning’s CIL Watch blog – shows how far advanced councils are with their CIL preparation in the South East. 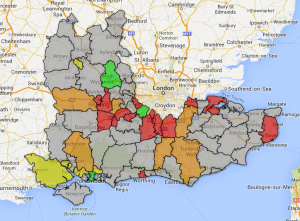 Councils shaded in green are already charging CIL, those shaded yellow have reached the examination stage, ones shaded orange have published draft charging schedules and authorities shaded red have published preliminary draft charging schedules for consultation. Councils shaded grey have yet to publish CIL plans for consultation.  To view our full online interactive map of proposed CIL rates across England and Wales, click here. Please use the contact details at the foot of this blog to notify us of any updates. 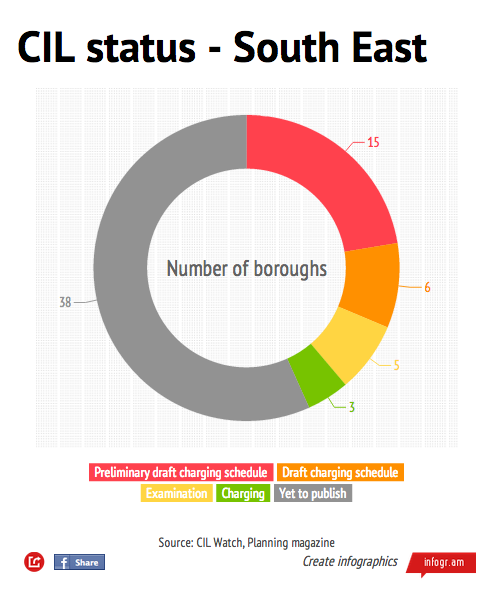 Next time round, we’ll take a look at CIL progress in another region. Please get in touch (contact details below) if you’d like your region to feature.

UPDATED – Who’s charging what? Our table of the CIL charges that have been published to date – now arranged by region – is available here.